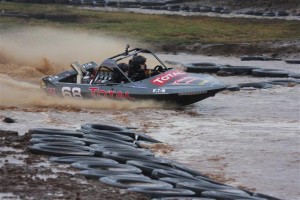 Caughey in action during the 2011 World Series

Six-time world jetsprint champion Peter Caughey will defend his world title starting at Featherstone this weekend, alongside ‘new’ sponsor ENZED, which has re-signed after a break from racing.

Caughey is aiming for a title trifecta after winning the last two world champs, but it won’t be easy.

The Canterbury-based superboat champion builds the world’s top racing boats, and he’ll be pitched against his own Sprintec craft raced by the world’s top competitors in a high-speed, high-adrenaline sport.

These tiny boats are all engine, the 1500 horsepower units hurtling the fragile craft at speeds of up to 130kph through a tightly twisting three-lap course they’ll complete in under a minute.

With no brakes to stop them, a single error in the knee-deep water can make for tragedy, and the world’s top racers must have nerves of steel.

Caughey sat out the last New Zealand season and says the current NZ champion is a front-runner, Leighton Minnell racing in Caughey’s old boat. “He’s got lots of track knowledge and race time and is campaigning the boat which won the last two world titles with me,” Caughey says.

The Canadian front-runner is former American superboat champion Cory Johnson, also in a Kiwi boat. “He’s a talented driver we’ve met with in the past and he’s a man to watch in future for sure.”

Dean Finch will be the Aussie to beat. The New South Wales native has never raced New Zealand tracks says Caughey, “But he races hard, he’s clever at setting up his boat and twin-turbo 475 Chevy engine and he’s got no shortage of power so he’ll be one to watch as will Victoria racer ‘Phonsy’ Mullan.”

“He’s got one of our latest Sprintec boats, also a twin-turbo with a late model Corvette motor and up to 2000 horsepower – it’s very impressive, but will the high-power motor be reliable? He’ll be fast on the straights and if he can adapt to Kiwi tracks he’ll be a hard man to beat.”

Other than Finch, Caughey will be racing his own boats with the likes of Wanganui’s Rob Coley aboard, “And Steve Bron will be another man to watch. He’s an ex-multiple motorcycle sidecar champ, a racer’s racer who only races to win. He’s totally focused on motorsport and has lots of race experience and determination, though not much time in a jetsprint boat with only four events so far. But he’s getting faster and more confident, and will be at the pointy end of the field.”

Caughey says the 15 superboats entered include the best-quality entries he can recall.

No wonder he’s glad to have ENZED back on board along with support sponsor Total NZ, and the same team that took him to his last two world championships.

“Dave McCallum has been with me since before boats were invented. It’s a privilege to race with a team like this. We know each others’ strengths and weaknesses, we’re all hard-core racers and I know when we turn up on race day we’ll have a great package and an awesome team, which includes navigator Karen Marshall, who took me to my last two world championships.”

Caughey’s boat has a new hull, a new jet unit and motor package and a new livery, with the guys at Smart Collision Repairs in Hornby painting it as the crew works on the engine in the lead-up to Saturday’s practice rounds.

As for long-term supporter ENZED. “Its employees have supported us all along and it’s great to have them back on board,” Caughey says. “A sponsor of this caliber is vital to our season, both in terms of the boost we get from its support, and from the quality of its products.”