As World SuperBoat championship goes down to the wire 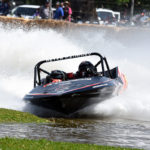 New South Wales’ Cabarita jetsprint track was always going to be tricky for the Kiwi teams. With nine islands to navigate in under a minute at speeds of up to 130kph, a tenth of a second hesitation can mean the difference between first, and also-ran.

New Zealand’s top teams knew day one of the last World Championship round could go to the Aussies, familiar with a track which has a long history – but which has never hosted a world championship race.

Cantabrian Peter Caughey – leading by just one point as he chases his eighth world crown – said it was predictably a hard day at the office.

One untimed practice led to two timed qualifying rounds in which three Aussies led – with Slade Stanley setting the fastest time today of 56.2, Phonsy Mullan on 56.59 and Daryl Hutton on 58.42 seconds.

“Compare that to our 63.32 in the first qualifier, after getting lost in practice and again in Q2, and it’s clear we’ve got some ground to recapture,” a disappointed Caughey said as the team packed up for the day.

Still, he’s cheered by the split times. IN Q2 his Trojan-Total Sprintec boat streaked past the timer at 21.47 seconds, 1.2 seconds faster than any other team today.

“One good split time doesn’t make a world title,” Caughey said, “And clearly we need to consolidate what we learned today at our first ever time at the Cabarita track.”

Three laps isn’t much of an opportunity to learn as much as the locals, “But we’re much happier with our track knowledge tonight than we were this morning.”

His was not the only team to struggle with the rotation, but that’s no comfort with a championship at stake. He and his navigator, Shama Putaranui, will review video footage overnight to build confidence and improve flow, both vital to succeed in this high-powered, high-speed sport.

“For us, around 80 per cent of the track flows, and once we master that remaining 20 per cent, along with our best jet set-up so far, we expect our times to tumble before the afternoon.”

Meanwhile on-form Kiwi Rob Coly also hit trouble, when his twin-turbo Hartley Nissan blew yet another head gasket. “Rob’s team are frantically swapping the reliable parts from his main motor into his new boat/motor combo. Rob managed two familiarization runs in an Aussie boat kindly lent by good-guy Scott Krause. Hopefully the efforts his team have put in will see him racing at speed tomorrow.”

Meanwhile the Peter Caughey Racing team have stripped and rechecked the boat, and it’s fully prepped for racing.