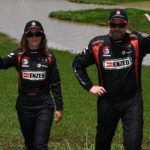 In the end it was not to be. After setting the fastest split times at every round on the final day of the 2018 World SuperBoat Championship in Australia, and the fastest time of the day, he made it through to the final top-three elimination round, and was rocketing down a shallow water channel at over 100kph when his steering wheel came off in his hands.

With no brakes to slow him, the boat speared straight into an island, took off – and landed right-side up with Caughey and his dauntless navigator, Shama Putaranui, unharmed.

But finishing on the third step of the podium meant he finished the Championship second overall at the last race of his career.

Caughey announced his retirement at the post-race prizegiving, to a standing ovation from friends, racers and crews after a day in which he’d proved his mastery – not only at wringing speed out of this light-weight, high-powered water-skimming jet craft, but at building them, too.

Indeed Sprintec – the company Caughey built and still runs today – has taken every World SuperBoat title since 2008, a record he hopes to continue now he can concentrate on the business of helping other racers to go fast.

But that was far from his mind when the flag first dropped on the final day. This Cabarita track had proved difficult to master. Non of the New Zealanders had raced it before, and with nine islands and a proliferation of channels to remember – the boats do around three circuits, with a different route each time, all in under a minute – many teams took time-sapping wrong turns.

Caughey says, “we eventually mastered the tricky rotation – Shama had it down pat but with so many small islands and channels, it’s hard to distinguish by hand signals which of several options is meant in the 100th of a second a drive has to make a decision.”

One junction was traversed twice each rotation, and “Each time I played it safe, backed off a little bit so I could find the channel – you’re steering round a shallow pile of dirt blind, trying to work out which channel flashing by is the right one this time around.”

Fortunately Caughey’s team uses a GoPro fixed aboard the boat, and overnight reviewed the footage to fix the style and shape of islands and channels.

“Our Sprintec boat is so agile that the increased navigational confidence meant we could circulate rather than going hard out, yet we still set the fastest split times in all sectors by a good margin.”

Caughey and his Trojan-Sprintec boat were on target for a 53-second run in the final, when the steering coupling issue came into play.

“We think it was caused by the salt water from Keith getting into the quick-release mechanism. There is a double safety system, but if the balls in it jam or partly seize… and that seems to be what happened.”

And then there’s Ollie Silverton’s win. “Aucklander Ollie has two New Zealand Group A titles, but this was his first World title. He had a three-second advantage over the nearest Aussie opposition, and he did it in a Sprintec boat.”

And in other good news for the Kiwis, NZ Rookie of the Year Sean and Faye Rice finished in second at round two in the Group A class.

It’s been 30 years since Peter Caughey built his first sprint boat in a friend’s garage.

Since then he’s won seven World and 12 New Zealand titles, “And the trophy cabinet is bulging generously.”

He’s raced in four countries, “And met some amazing people. I can’t thank enough the many team members who’ve stood alongside me, past and present, and my loyal sponsors and partners – without them all I’d have achieved very little.”

“ENZED, Trojan and Total have all been outstanding commercial partners during the greatest part of my racing career.”

What next for this legend of jetsprinting?

“New challenges and horizons,” Caughey says. “The bucket list is exciting, and I’ll be spending time with my incredibly supportive wife and my children, Georgia, Harrison and Mackenzie, plus friends and family.”

“It’s going to be really difficult, not to be travelling and racing with my talented current team of Ross Baynes, Shama, Jeremy Madeley and my wife, Karyn Caughey. We’ve all got busy lives and lots of interests, but I’m sure we’ll enjoy our social get-togethers.”

And don’t get Caughey wrong, jetsprinting is still writ large in his future. His Sprintec order list is longer than ever, and there’s a new prototype 750hp quad sprint jetboat in his workshop, due to be launched this month, “And some exciting plans for our Sprintec business.”

Watch this space, Peter Caughey may no longer be at the wheel, but the Sprintec brand will continue to clean up on sprintboat circuits for many years to come.

Competitors in the 2018 World SuperBoat Championship