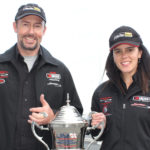 Peter Caughey and his epic crew will line up on the start line tomorrow to regain the world Superboat crown he last hefted back in 2014.

That was far from the first time the crew has returned home with the silverware. Caughey has stood on top of the World podium seven times now, five of them (2001, 2002, 2008, 2009 and 2014) in the blue riband SuperBoat class, and has taken 12 New Zealand championship titles – 10 of them in SuperBoats.

So there’s form there, but a formidable field will line up against him, from Australia, New Zealand and America.A total of 22 teams have entered the SuperBoat class, something of a record, Caughey says, including the Kiwis – eight NZ teams have entered, with four boats in each of the World Championship classes.

There are eight NZ-built Sprintec boats in the SuperBoat class, and another three in Group A.

To take them on, the Trojan team fully rebuilt the motor, and made a few performance enhancements with help from Tracksport Engines. The boat and the jet unit have also been fettled during the off-season by the team at Sprintec.

The biggest change this time around will be the team title. It’s the first time in decades that the crew has lined up without ENZED backing, after a long and successful partnership.

Instead, Caughey is delighted to announce that Trojan Trailer Equipment has stepped up to take team naming rights, after being a support sponsor. “It’s a great fit, as every sprint boat needs a trailer, and our Sprintec business builds many trailers each year – all with quality equipment supplied by Trojan.”

“It’s taken a big effort by each of the team members to get the boat to the event, and logistically it has been a big job, not made easier by the 2000km distance between rounds one and two.”

Shama Puturanui is back in the navigator seat, with Ross, Karyn, Jeremy and Jono keeping the boat at its best.

“I might be biased, but I think we’ve got the best team in this sport – it’s a very well tested and proven package overall.”

They’ll have to be good. Caughey says the Keith Jetsprint venue that hosts the opening round is “sensational”.

“Clearly it’s been a huge effort by the locals, and their ongoing improvements and investment have produced a world-class venue. The fact it’s located within the boundary of a South Australian town with a population nearing only 1200 would suggest spectator numbers may not be as big as the 5000 to 10,000 who usually front here, but those who are in place by flag drop will be treated to a high-adrenalin, high-speed day,” Caughey says.

He hasn’t raced at this track, so can’t yet comment on conditions, but he will say that it looks fast-flowing. “Id expect the turbo boats to be fairly fast, as will Australian teams who’ve raced their past two events here.”

Racing begins Saturday morning with two practice runs and two qualifying runs, before the serious action gets underway on Sunday.

Competitors in the 2018 World SuperBoat Championship