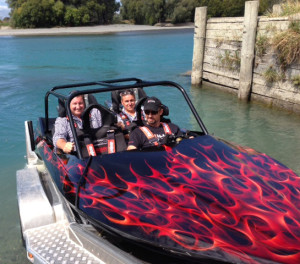 The world’s first four-seater jetsprint boat has hit the water in Wanaka, ready for its public debut at round five of the New Zealand Jetsprint champs at Easter.

The QuadSeata is the V8 supercar of jet boats – as different from its everyday jetboat brethren as that supercar is from your everyday Falcon or Commodore.

Designed and built by Peter Caughey’s Sprintec, its aim is to share the experience and thrill of high-speed jetsprint racing on a specialised jetsprint track.

It’s powered by a 6.2-litre aluminium V8 Chev motor producing 550hp and fuelled by Avgas. It’ll hit 100km/h from rest in just 2.5 seconds, and pull up to 8g of cornering force – more than Apollo 16 experienced on re-entry. And it’ll do all that without brakes, while carrying its driver and three passengers.

Four-time world SuperBoat champion Peter Caughey, who designed and built the new craft, says it’ll get around New Zealand but is based at Oxbow Wanaka Adventures, where ordinary punters will be able to experience a slice of real jetsprint racing action.

“We delivered it to Wanaka yesterday for the customary champagne over the bow in front of a crowd of local Wanaka enthusiasts,” Caughey says, “but it will make its public debut with a pair of successful bidders in a charity auction on Trade Me until Feb 23, raising money to help a Martinborough fireman severely injured by a lowlife after going to the rescue of a pair of teenage girls.”

“I’ll be giving the successful bidders a ride they won’t forget; I’ll have my race face on as they’ll be on the water just after the final, and she’ll be quick. We’re still tuning via the MoTeC computer for Wanaka’s high altitude to get more performance out of it.”

Building the boat wasn’t easy. Sprintec usually designs race boats with lightweight shells and just enough room for drivers and navigators who are fit, and honed for racing. “Trying to include all the features you need plus two more seats to fit folk up to 120kg and 190cm or so, that’s never easy while keeping the boat light, nimble and with all the safety features built in.”

New owner Lloyd Ferguson of Oxbow Adventures is chafing at the bit to drive it, Caughey says, “He’s got the enthusiasm for adventure of an 18-year-old and he loves sharing it with people. He and his wife Julie are adrenalin junkies but they like everything to be just right.”

They built the new jetsprint track at Wanaka, across the fence from the Warbirds venue and 100m above the spectacular Clutha River. “It’s an impressive facility, the islands are grassed, the safety fences are up, the rotations are set and it’s been tested ready for the Easter round.”

“It’s renewing interest in jetsprinting in the South Island, we’ve got older racers returning and sharing the drive with their kids, we’ve got new boats entered and a real buzz from the new venue. We haven’t had a permanent track down here for 20 years or more and it’s great to see the enthusiasm it’s generated.”

“For Wanaka to step up to the plate like this is impressive, and it’d be good to see a world round of the Jetsprint champs here in three or four years.”

Meantime Caughey is packing his ENZED Sprint boat to head north for Meremere and round three of the NZ jetsprint champs on February 24, where he currently leads the championship series by a nail-biting single point from Wanganui’s Leighton Minnell.

NOTE: The Trade Me auction for the Jetsprint Adrenalin Package closes on Saturday, February 23