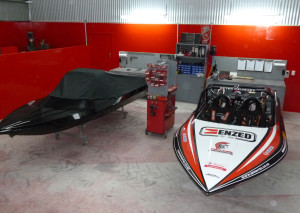 At its helm, multiple New Zealand and world superboat champion Peter Caughey, the current NZ titleholder for the methanol-burning SuperBoat class and a man with 25 years of building hyper-powered lightweight craft that win.

Canterbury racer Caughey says it was high time he got a better workshop – the new location in Ohoka now also nearer the city, and the Waimakariri River. “Our old premises, you could see on customer faces, ‘does this corrugated shed really turn out world-class boats?’ and we’d certainly outgrown it, production became a series of frustrations as we were so short of space.”

Fortunately Caughey and his sidekick Dave McCallum, a specialist engineer, are both highly organized, “I’m a bit of a nutter in that regard and that got us through.”

Finding the property was a stroke of luck – Caughey had expressed interest in the property in 2009 and here it was, back under the auction hammer.

Caughey’s team and his brother Shane spent six weeks building and painting, “I don’t ever want to see another airless paint gun in my life, but we have a grouse-looking workshop, one of the few with red walls – red ones always go quicker!”

There’s plenty of room to develop the business and extend it if needed and it’s fitted out with the right lighting, pneumatics, a proper machine shop and storage rooms, “it’s a lot more like you’d see for a smaller Nascar team,” Caughey says.

Whether it’s racing a World Championship or building a boat for another racer, Caughey is nothing if not focused. “We try to focus on one boat at a time alongside our own, but we recently had four in the workshop in various stages of completion – one’s just left to a client in Canada.” Caughey also builds boats for America and Australia, “The Aussies have their final in a couple of weeks and two of our boats are hot favourites for the two classes.”

So what does Caughey do? “We’re the only shop in the world that offers a full turnkey jestprint package, we provide everything from the hull to the jet to the seat, the wiring loom, engine and paint, graphics, airbrush work and trailer right to water testing, you name it, from A to Z. Anything we can’t do in-house to the standard we expect we contract out to specialists. We are only interested in the best of the best, and for some parts, once we’ve designed them we find the best people to build them so we can ramp up production as we need to.”

What makes his workshop special? “25 years of mistakes! “He laughs, “We can tolerate mistakes but we don’t like them twice. Dave and I are pretty unforgiving on each other if we happen to make the same mistake twice, we are methodical and analytical, though we do cut the team enough slack to try different ideas and be innovative.”

Caughey says, “We don’t like going back over old territory. Lots of mistakes gives you lots of solutions, and Dave and I both have a bit of a leaning towards development and creating new ideas. I guess those hard yards we did through the 1980s and ’90s, we’re reaping the benefit for our own team and our clients.”

Keen to see Caughey’s boat as it’s developed for the upcoming New Zealand season? He’s set up the space to cover corporate entertainment, “target shooting and a few other activities, so guests can check out the workshop, have a few beers and a BBQ, spin round on a grass cart, chuck a few tomahawks into a target – and see how the boat is coming together.”

He’s got a few weeks yet to the opening round in Wanganui on December 27 – when we’ll get to hear the newly-fettled ENZED SuperBoat open up in anger.