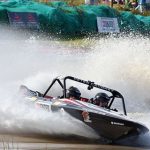 Driver Peter Caughey and Navigator Shama Putaranui on the Methanex Aquatrack before the event was cancelled due to rain.

The weather won the day at round one of the New Zealand SuperBoat championships held at the Altherm Jetsprint Championship in Taranaki today, though the two other classes are expected to post a result.

The mighty methanol-snorting SuperBoats are veritable waterborne rocketships – with over 1000hp propelling a 500kg boat with no brakes.

Defending champion Peter Caughey says though visibility is a big issue at the speeds these boats race, it’s the engines that are the issue when it’s raining hard.

“Many of the SuperBoat motors run open trumpets with fuel injection, and in heavy rain the water gets in. Water doesn’t compress, it’s not good for the electrics or the motor.”

But it’s safety issues that halted the SuperBoats before the first elimination round. As Caughey says, “We’re going too fast to risk an ignition failure due to water.”

With no brakes, if the engine dies at 140kph or more the boat shoots off the water and careers across the land…

“We completed two runs in light rain and one in heavy, we were the last SuperBoat to run and the weather just got worse. We were very happy with the lapt ime we got, we can see there’s a lot of potential there, the boat just got better and better, the ENZED team was making fine-tuning changes and the boat was setting up nicely for the elimination runs, which we were looking forward to.”

However, Caughey agrees that stopping the racing was the right call. “It is a difficult situation for the race controller, but Eric Hoeksema is hugely experienced, and it eventually got to the point where he knew it wasn’t sustainable.”

If one of the elimination rounds had been raced, those times and places would likely have determined the result.

With qualifiers only run, there is no result, and all those who entered the SuperBoat class and crossed the start line under power will be awarded 10 points going into the second round.

Caughey may not have posted a result, but he’s still stoked – as boats built by his Sprintec business hit the top four times in the class. (correction: three of the four fastest boats were Sprintecs)

“It’s always nice to have four of our boats at the pointy end of the field, which is encouraging. One of those was our new boat, with young Sam Newdick driving at his first SuperBoat event. He has an older motor, and he’s doing very well to get the times he posted.”

Caughey said spectators still had a good day, with the Group A and B classes going a bit slower and able to post a result.

“We can’t believe how many spectators stayed though, the corporates too. It’s quite a spectacle, this track, it’s been reworked, with new islands, and it’s been well prepped by Leighton Minnell. It’s a real asset to the Taranaki area, and we look forward to returning here for round three, on February 26.”

Caughey says it’s been great to have the ENZED crew back together and gelling well, “They’re a great bunch of people and work well together. We were really starting to build momentum, and some of the opposition teams are proving very fast and competitive.”

You can bet Caughey’s ENZED team will be raring to go, and prove their rebuilt motor has the goods to regain that title.

SuperBoats like Peter Caughey’s ENZED Sprintec racer use fuel injection and open trumpets, which don’t gel well with heavy rain – and the SuperBoat class was called off after three qualifying runs