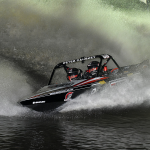 One round to go – and four points separate the front-runners

A win by a back-marker and a $12 switch threw all predictions out the window at the penultimate round of the Suzuki SuperBoat championship at Whanganui at the weekend.

Fourteenth-placed heading into the round, Richard Burt took the chequered flag while series leader Glen Head holed a piston and was out in the top 12, and series-second-placed Peter Caughey had a $12 switch failure and was unable to race, also knocked out from the top 12.

As a result just four points separate the top five going into the last round, and with two of those racers former world champions, sparks are expected to fly at Featherston’s April 24 final.

“Top 12 is the worst run to have a problem in our sport,” Peter Caughey said after the race, “That’s when you suffer the greatest points penalty if you don’t get through that round.”

Caughey crashed out of the top 12 in round one, at Meremere, and it’s taken every ounce of his ENZD boat’s speed and driver skill to fight his way back to second, so he was gutted when the switch controlling the reverse bucket failed.

“We have two, one drops the reverse bucket into the jet stream so we can reverse, the other lifts it to drive forward. The reverse switch worked fine, we reversed off the trailer and into Whanganui’s small entry pool. You have to be quick to move forward or you’re pushed into the wall by the other boats warming their motors on the trailers, it’s a bit of a swirl pool and I pushed the forward button to lift the reverse bucket out of the jet stream, but nothing happened.”

Caughey checked as much as he could in the few seconds he had, but the boat hit the concrete wall across the pool. The safety team and ENZED crew retrieved the boat and got it back on the trailer. “But from the time we switched the motor off, the timer’s ticking down five minutes before we have to be back on the water and ready to race.”

Peter and his navigator, Shama Putaranui, stayed in the boat while crew chief Ross Baynes and Jeremy the spanner-man checked it out as fast as they could. “They found the switch worked intermittently when we were high and dry and the motor wasn’t running, so we relaunched into the water and it failed again.”

Caughey was philosophical. “It is what it is. We have been using that brand of switch for 15 years and have had no issues during a race, so that came as a real surprise – and we’ll be making some changes before the final in two weeks time.”

As for the results, the sidelined Caughey said Richard Murray had a good day on his home track and showed a lot of pace early on. “He was one of the first SuperBoats to step up and set similar times to ours, he quickly clocked up some 41-second runs and made the top five, then crashed spectacularly at the infamous corner five. He walked away unharmed, and we expect the boat to be ready for Featherston.”

Caughey said “Glen Head’s new motor had mechanical failure in the top 12, likely a holed piston or injection failure, and Leighton Minnell found some extra performance from his motor and jet unit changes, and this was a good track for him to make the most of it, and get a good result.”

Caughey said it was great to see Rob Coley in the final after a mixed season and some spectacular crashes. “He’s been giving it his all and had a clean day’s racing.”

Caughey’s fastest time – in his second run – was a 40.94, “I’m pleased with my ENZED/Trojan boat’s performance, which makes the day doubly frustrating, but I’m looking forward to slipping the leash for the final.” 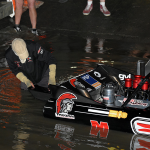 Crew chief Ross Baynes checking the reverse bucket as he tries to keep Peter Caughey in the event.