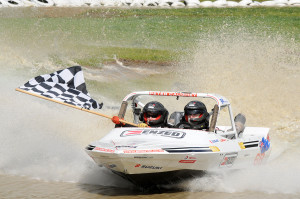 Defending world superboat champion Peter Caughey won the final round of the UIM World Superboat Championship at Wanganui this weekend, but lost his world crown.

The six-time world jetsprint champion, four-times a winner in the prestigious superboat class, had his plans to launch the latest in cutting-edge racing craft at the opening round dashed after problems with US-supplied parts could not be rectified in time.

Instead he’d leased fellow racer Steve Bron’s second string boat, painted it in his ENZED colours and fought a battle against the clock to get it competitive.

It’s a battle he lost at the opening round at Featherstone when he crashed out in seventh place, but desperate measures during the final at Wanganui saw him win the day.

“Navigator Karen Marshall and I were struggling to get below a 48-second run and kept making boat changes between each round. But they had to be small changes as we didn’t want to risk racing a lemon,” he says.

By lunch time Caughey knew caution wouldn’t win him the race. “So realising we didn’t have the jet unit impeller combination we needed for this boat on this very demanding track, we stripped the back half off the unit, used it as a mount and repitched the impeller with a Black and Decker power file.”

Engineers at the event thought Caughey had lost his marbles. “Usually it takes a high quality lathe with fine tolerances to ten thou and three or four hours work, but we used a cardboard template and ripped into it with the file during the lunch break.”

That’s the short story – but Caughey won his gamble. The boat began to perform as he wanted it to.

Which is lucky, for by then it was also being raced by rival Steve Bron, whose first-string boat had engine trouble but who was then knocked out in the top eight elimination in the boat he was leasing to Caughey.

“It was very busy having two drivers in the boat while making the changes,” Caughey says with dry understatement, “but we won with a 47.16 time, the second-fastest of the day.”

Leighton Minnell had set a fastest time of 47 seconds and came second to clinch the world championship with Australian Phonsy Mullan third in the latest boat Caughey’s built, “So we had my Sprintec boats first, second and third which was pretty cool.”

Caughey says it’s been a while since a big block Chev took a victory like this against this calibre of competition. “That we can get in a boat that old and one which lacked prep and hasn’t won for a long time, and to take a victory against such a high calibre field, that says a lot about the quality of the team I’ve got behind me.”

“Leighton Minnell was second in the boat that has now won three world titles – two of them with me at the helm. And Phonsy  Mullan was driving really well all day. He was very smooth, and very controlled considering the amount of power he had and the potential for his twin-turbo boat to be a handful given he can make 1500 to 1900hp.”

“To master the driver, a boat like that and its jet unit combo – that’s uncharted territory. Phonsy was capable of a 46 in that boat today if he’d lined his ducks in a row, but today was the day for the turbo boats to strut their stuff.”

Minnell’s second place at the final round gave him the world title, with Phonsy Mullan second, Ray Ferguson third and Peter Caughey fourth.

Reg Smith took the world Group A title for the Kiwis. Caughey paid tribute to the veteran racer, who’s competed every season since 1997, and ended his career with his first NZ title last year and now the world crown.

Caughey’s philosophical about winning the round but losing the title. “It was an awesome day. We stared adversity in the face and came out trumps thanks to a huge effort by our team.”

“It was fantastic to see our boats doing so well, to win in front of a good crowd from our ENZED and Total sponsors and to give them victory – especially in such an old boat.”

What’s next for Caughey? “To get our new boat running in a shakedown before this season ends to show what it’s got, and then we’ll be focusing on the next season, and regaining our world crown.”