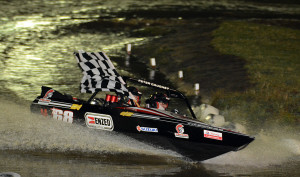 The 2014 Suzuki SuperBoat championship went right down to the wire, with any one of three racers in with a chance at the title.

But it was Rangiora racer and defending champion Peter Caughey who took the chequered flag and the title in fine style, setting the fastest time of the day at 49.73 in his ENZED boat under lights – the only racer to cut under the 50-second mark all day.

“It was great to have such intense competition, with Phonsy, Graeme and Leighton leading the charge,” Caughey said.

Caughey stated his intentions from the outset, with the fastest first qualifying time on a 52.93, with hot contender Graeme Hill on 53.7, and the rest not far behind.

Caughey again set the fastest time in the second qualifier but Australian champion Phonsy Mullan and Kiwi Graeme Hill weren’t far behind, and as the sun set and the lights blazed through Wanaka’s autumn chill to light the steam coming off the water, Mullan posted a blinding run, his 1600hp boat stopping the clock at 50.496 seconds.

But it’s the elimination rounds that matter, and the Australian went a tad wide in the top eight eliminations and was knocked out – later citing visibility problems.

But the Kiwis knuckled down and kept the 10,000-strong crowd on their feet as these tiny craft powered by mighty motors pumping out 1000hp or more in a 500kg boat, racing three laps of a series of islands in 50 seconds without brakes, and after dark, pretty much defined motorised insanity, as the pink and blue flames shot from their methanol-snorting engines were clearly out to prove.

And it was down to the final five, then four as the starter motor on Leighton Minnell’s 850hp Chevrolet motor failed to fire. Nick Berryman couldn’t set a competitive time, then it was Greg Mercier stopping the clock at 52.895, Graeme Hill’s V8 Nissan crossed the line a nail-biting 16 hundredths of a second slower and finally Peter Caughey, his 1000hp small-block V8 in its Sprintec hull catapulting him out of the gate and to that championship-winning 49.73-second time. That’s three complicated circuits around shallow islands, in maelstrom of mist and spray that caught the lights and intensified the drama, and in a boat without brakes all in under 50 seconds.

But as they loaded his boat back onto its Trojan trailer Peter Caughey was quick to thank his team, “A superb display of engineering and racing performance from my ENZED team,” he said, “I’m very proud and thankful of all their efforts and skills.”

Caughey’s now taken the NZ SuperBoat crown an amazing seven times to add to his four world titles, but his team are just hitting their stride. And they’ll need everything they learned this season come August, when they head to the States to try and win back the world SuperBoat crown for New Zealand.