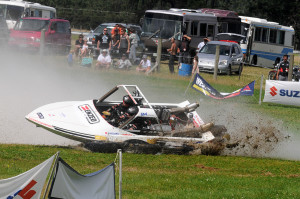 Kiwi Leighton Minnell won the opening round of the UIM World Superboat Championships at Featherstone today in defending champion Peter Caughey’s title-winning boat, but that win was bittersweet for Caughey.

Caughey’s new boat wasn’t ready for the opening round, and he leased fellow competitor Steve Bron’s second-string craft to make it to today’s start line.

Second-fastest on 43.78 seconds by the top-eight elimination round, Caughey was on track for the final when he clipped land and took off, and out of contention.

“I’m not happy but that’s just how it is,” says the resigned Caughey after watching his rival win. “It was a gutsy move to jump into a boat with so little time and prep, we’re particular about how we prepare our race boats and put a lot of effort in during the days prior, but not as much as it needed.”

The Canterbury racer says, “It was a boat I could drive at 90% and put up pretty good lap times, but as soon as I tried to push it on there were two or three corners that got me.”

“My old boat would have blown round no problem as it did for the winner, Leighton Minnell, it’s lighter and its fully race prepared with the latest impellers and jet unit configuration so it’s a well sorted package, whereas we’ve had to go out and sort Steve’s boat, and we’ve had to sort something out before every run.”

These jetsprint boats crack zero to 130 in 2.3 seconds, they’ve got no brakes and scream round islands at whip-lash speeds, capable of turning on a dime. That means their drivers must withstand neck-snapping forces and field bullet-fast reactions.

“The boat pulls 4g on corners, this motor’s 30kg heavier than my own and at 4g of cornering force that becomes 140kg trying to throw you out of the corner, and that’s exactly how it felt. When it got to the critical rounds and I got my race face on I wanted to push harder, and reacted as if I had a fully sorted boat I could push it and ride fast.”

“That’s worked with my Sprintec boats for years, they give good feedback but this one just served me up. I thought I’d shown it enough respect but it didn’t agree, and the rest is history.”

“It proves my point that a light, sweet-handling boat will trump power,” Caughey says, “But that’s just how it is, and look, it was a good opportunity to get some points. But I’m not in a good position to win a world title from, there’d have to be a lot of people very unlucky.”

Still, Caughey says seeing the boats he’s built score so high was some consolation. “Leighton won with a 42.43 in the boat we won the last world title in, and what an awesome final with Ray Ferguson and his wife, Nicky. Third was our latest customer boat with Aussie Phonsie Mullan at the wheel.”

Caughey says “Next week I’ll be in my new ENZED boat for the final. I’ll be pretty grumpy if not – the engine builder better stand and deliver!”