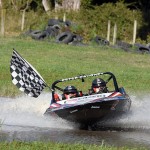 Peter Caughey took a hard-earned win at the Hastings round of the Suzuki SuperBoat championships, to haul in current points leader Glen Head.

Head had mechanical problems in the top-five final – the motor shut down, and he ran aground, and Graeme Hill met a similar fate, the pair finishing fourth and fifth. With Richard Murray’s second – his first podium since moving to SuperBoats – and Rob Coley third, only two points now separates Head from a hard-chasing Caughey, with Murray and Coley now seven and nine points back with two rounds to run.

An error in the timing system caused delays and the event ended with a top five, instead of the usual top three final, which put the pressure on, Caughey said.

“The boat was going well, the team made a few fine tuning changes with the new valve springs which Tracksport helped fit to get the motor back on top of its game again, and it’s feeling really angry – which was good,” Caughey said.

“We were setting the fastest lap times through most of the runs, and in the final we clocked a 44.2-second time, the fastest of the event, which was pretty rewarding. That’s 44 seconds for three circuits round a set of tiny islands, in a 1000hp craft that’ll hit 140kph and races without brakes.

It’s exciting stuff, but Caughey takes it all in his stride. He’s just pleased his motor and therefore his development and tuning programme are back on form.

Caughey likes the Hastings venue, “It isn’t big, and doesn’t look as if it’d be fast and flowing, but it always proves to be, and there’s a little bit of space to allow two or three equally quick racing lines, that extra bit of space on some corners to choose how to place the boat to set you up for the following corners, so it’s quite unique in that regards.”

However the large spectator crowd saw some mixed results. Graeme Hill had been showing good form, as had Glen Head after a crash from an early throttle problem, and Richard Burt had mechanical issues and ended up eighth.

It’s not the first round to see an unexpectedly mixed bag of results. “It’s ironic, given Glen and I are so close, that we haven’t yet had a proper head-to-head in the New Zealand champs – thus far one of us has run aground or had mechanical problems. That challenge has yet to be raced,” Caughey said.

“Meanwhile, with only two points between us and a handful of races to come, it’s game on for round five.” 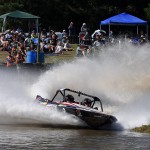 Peter Caughey blitzing it at Hastings

Round 4, Hastings, top five only