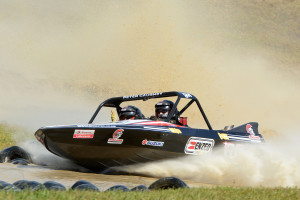 The Hastings track is a unique blend of Kiwiana, styled on the tight technical river track designs of yesteryear, and it’s sure to produce exciting racing from these high-powered nimble craft.

And there’s a class field all with that podium in their sights. “There’s a great list of competitors,” Caughey says. “Steve Bron in our ex world championship boat, he’s a hard charger. Leighton Minnell, Rob Coley, current Australian Champion Phonsy Mullan and a heap of really competitive guys like Hastings local Graeme Hill, currently leading the points table in his Nissan twin-turbo V8 – we will really have to put on our A game.”

Whatever Caughey’s result his Sprintec craft will be at the sharp end of the field, among them Group A racer and current Australian Group A champion Brooke Dixon, who had her first SuperBoat win last weekend in NSW, Australia, in her father’s SuperBoat, “A fantastic effort” Caughey says,  and who will race her Group A Sprintec boat here.

Having checked the boat over and done a complete oil change with Total oil, Caughey drives north from his Canterbury base on Thursday with the ENZED boat on its Trojan trailer heading for his second home – the inter-island ferry – in good time for Sunday’s flag-drop.