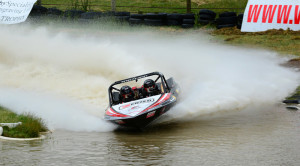 The world’s first stadium jetsprint event will launch with a roar on Saturday 25th, with 18 superboats entered for the ENZED V8 Jetsprints at ASB Baypark, the biggest field in memory and one that includes trans-Tasman contenders, and up to 50 boats among the three classes competing on the day.

Six-time New Zealand and four-time world SuperBoat champion Peter Caughey says it’ll be a blinder. “I wouldn’t still be racing if I didn’t get excited about every jetsprint but this event is very special, very unique – a stadium jetsprint with the track dug into the international rugby field in the middle of the ASB stadium.”

He says the view will be stupendous, “It’s a 360-degree stadium, and looking down on the track rather than across the water will provide a birds-eye view of the action, with the lower seats delivering water spray and a close-up look at just how fast these 1000-horsepower boats can go.”

Caughey says he’s always thought this is how the sport should be presented, and it’s the future at international level. “It’s been two years in the making, you’ve just got to take your hats off to the foresight of the Bay of Plenty council for supporting the event, and to Jetsprint Bay of Plenty for making it happen. You know it’ll be good when the international-standard hospitality suites sell out fast…”

Caughey’s now focused on the race ahead. “We’ve only seen video footage of the track layout, but it should suit our boat, anywhere technical it rises to the top of the pack. Baypark is similar to Wanaka, reasonably tight with some technical sections and a bit of fast stuff.”

The teams won’t see the rotation until Thursday night when they’ll get their heads down to learn the route they must take over shallow channels round tightly-packed islands at speeds of up to 130 kilometres per hour – without brakes. “There’ll be some anxious studying, I’m sure.”

Caughey’s main competition will come from Australian SuperBoat champion Phonsy Mullan, Feilding’s Steve Bron, “he’s in our old boat, an awesome boat with a great motor and driven by a hard pedaller,” he says. “Leighton Minnell in an older Sprintec was fast at Wanganui, and Pat Dillon has rebuilt his supercharged Ford, ‘the Hulk’, after his huge crash at Wanganui.”

The event kicks off at 2.30 with the best action from 6.30, and will finish with a 10pm final raced under lights, which can cause visibility problems with spotlights catching spray and blinding the drivers skimming close to the water at high speed.

At least Caughey can be confident he has a good team behind him, “Navigator Karen Marshall, my crew and my sponsors have been a successful tight-knit team for some years now,” he says, “and the good news for  us is that Total oil has signed on again, rejoining Trojan and ENZED and marking ten years of our using their quality product.”

But there’s still a long road to go before the first flag drops for the ENZED V8 Jetsprints at ASB Baypark, as Caughey leaves his Rangiora, Canterbury base to make the long trip north.

Round 5, April 5 (under lights) Wanganui

Championship points, top 10 after one round