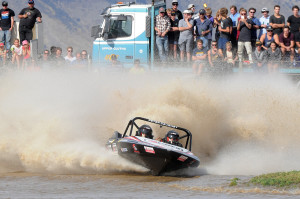 Canterbury racer Peter Caughey and his ENZED team head into the final round of the New Zealand SuperBoat championship at the top of the leaderboard, with the country’s quickest racers lining up to get between him and that chequered flag.

And the spotlight will be on them all, with the elimination rounds to be held under lights, and the final at around 9.30pm.

“We’ve raced under lights before, in Australia, and it’s certainly fantastic for spectators, especially with the methanol-fuelled SuperBoats, which spit yellow, orange and blue flames – only visible at night and most spectacular from the supercharged boats,” Caughey says.

“This track rotation is the same as used at a previous world champs so we’ll look forward to comparing our times! This is a big track with lots of fast stuff, there’ll be a lot of 100 per cent throttle action and we’ll be using 15 to 17 litres of methanol per 55-second round; this Sprintec boat’s a hungry beast!”

The track may be quick, but after dark it’ll be demanding to navigate, “Finding those apexes with limited visibility at the high speeds the SuperBoats are going is challenging, to say the least,” Caughey says.

But he likes to visualise his route round the complicated course from the pits, often spotted standing by his trailer, talking and steering his way around the course, so that when he hits a corner in anger he’ll know what he should be seeing and where the apex is.

And he’s looking forward to the challenge. “When the lights come on it feels like you’re in a superbowl, so it really focuses attention on the track. And with the first boats in the water at 2pm and the finals in the dark, there are a lot more variables for us to wrestle with, but safety’s not been forgotten. The promoters have painted island-edging tyres white, added white marker pegs, and will call a halt for a pit walk just before 6pm, when the risk of sun strike is highest.”

Caughey’s been enjoying this season, “I’ll have mixed feelings at Wanganui, this could be the last race for our team and its ENZED, Total and Trojan sponsors for six months, which seems a long time when you’ve been racing every two to three weeks, and enjoying it!”

“Other than that, we’re hanging out to get to the track and see if we can come away with a successful result in the final round. We’ve been doing spanner checks on the boat, we’ll hit the road on Thursday evening and board the ferry north on Friday, to be poised to go as soon as the flag drops on Saturday afternoon.”