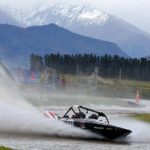 Defending New Zealand SuperBoat champion Peter Caughey crossed the start-line in a brand-new boat today, and bagged the fastest time every time he took to the water at Wanaka’s Oxbow Aquatrack.

Even this seasoned racer was taken by surprise at just how well the new engine, hull and jet unit worked.

“It’s the first time it’s been on a track, and I thought I was being pretty cautious with it, though I thought we’d probably made the top five. But as soon as we were on the trailer people were commenting how quick it looked – and it turned out we were fastest, by a generous margin.”

Caughey says, “It was a bit of a shock to me too that the boat put up such a good pace, as it’s still got a lot of potential. We learned heaps today about setting it up, and the whole ENZED team was busy, downloading data, fine-tuning, and they’ve done a fantastic job. Having them do so much prep frees me up to decide how I want the boat to be, and they get on with making the changes, which is a privileged position to be as a team owner and driver.”

But the day wasn’t an easy one, due to very changeable conditions, with sunshine, wind and rain passing through all day, and sometimes within an hour, with high winds, if not a lot of rain until just before the finish.

That complicated racing on a technical rotation, the hardest Caughey has seen at the Oxbow Aquatrack, with several ‘money’ corners prompting crashes all day.

And it was a spectacular crash which stopped the event, when Simon Gibbon’s Novus boat left the water, and flew into the boundary fence, damaging the fencing and taking out the power lines vital to work the timing gear.

As the crew was extracted – and confirmed to be okay – the rain really came down, and as all classes had completed that top-nine elimination, the event was called, and results based on placings from the completed elimination round.

That put Ted Sygidus in third, an Australian who flew in to race his Sprintec boat for the event, with Sam Newdick – racing Caughey’s previous motor, and settling in well with a new package at its first race – in a healthy margin ahead, in second.

“That put our three most recent boats on the podium,” says Caughey, the mastermind behind the Sprintec business.

“We aim to design boats that are tunable to all sorts of tracks and water conditions. This track has a lot of lift and boats generally feel a bit loose here, which is what likely contributed to several crashes today, but it’s the same track that we all have to race, and we have to work around that,” he says.

“On a technical track and rotation like this, if you drive too hard you go slower, and my fast lap time was achieved more by using my head than my foot, and it definitely worked. That meant we could produce those laptimes consistently, which is vital when you race in a cut-throat elimination system.”

Caughey was stoked to see so many competitors make the trip down from the north island, “The next round in the Wairarapa in a month should be a fantastic spectacle with so many really fast teams.”

“Hopefully the weather will be friendlier, and we’ll get to go all the way through to the finals: clearly, we’ve got a good race boat for the future.”