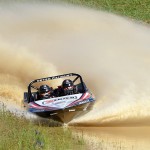 The Taranaki won’t know what’s hit it this weekend when the SuperBoats hit town. For there’s a new track, named for a new sponsor – Methanex – the supplier of the methanol that fuels these monster motors to insane speeds.

Seven-time New Zealand SuperBoat champion Peter Caughey says it’s a fantastic association. “It’s a huge producer of methanol and has a reputation second to none for quality. A lot of the best methanol in the world comes out of Taranaki, and given most of the SuperBoats use 12 to 20 litres per minute, that’s a pretty cool association to have!”

Caughey says the oil and gas industry has been an important sector for the local ENZED guys, “And they’ve been a really strong supporter of our team over the years, too.”

He is looking forward to the challenge set by the new ‘Naki 500’ event. “We haven’t seen the track yet, it was designed and built by renowned fellow racer Leighton Minnell, and you’d expect it to suit his turbo powered boat, we hear it could be quite technical. It looks to be a bit of a navigational rabbit warren with seven islands in a relatively small venue, so it’ll be a bit of a challenge for everyone, but it’ll make some exciting action as the SuperBoats release their 1500hp!”

Taranaki is shaping up to be a hotly contested third round of the New Zealand championship, which was interrupted by the two-round World Championship after round two.

“It’ll be interesting to watch those teams who didn’t perform as well as they’d hoped, they’ll be looking to redeem themselves as soon as possible.”

That’s a comment that strikes close to home for the Canterbury racer, who builds the world-famous Sprintec hulls.

“We’ve just freighted Rob Coley’s boat back after the spectacular crash at Bay Park, with a list of important performance improvements made, and we fully expect he’ll be on a mission and showing a bit more form than he was able to at the worlds.”

“We’ve also repaired our boat after Bay Park and are really looking forward to racing, especially now it’s properly set up to make the most of the performance we’ve gained. We expect to be able to race it hard, and reliably, with confidence – which is always a good place to be, and with the new fuel pump on board it should all be happy days.”

Caughey says spectators are guaranteed a spectacle. “The two new world champions – both Kiwis – will experience the new sensation of having a target on their back from this event forward. Teams are always wondering just how fast they could have gone if they hadn’t hit issues at the worlds, and there’ll be a number of us hoping to set the record straight and strengthen our points tally.”

The Methanex Aquatrack is next to Kart Sport Taranaki, Joll Street, Waitara.

Top 10 only, after two of six rounds