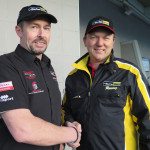 New Zealand SuperBoat champion Peter Caughey and his team flew to America today to race for his fifth World Superboat crown thanks to a deal struck with Parker Hannifin, parent company of America’s ParkerStore and of his New Zealand series sponsor, ENZED.And as soon as the ink was dry he’d packed up his Sprintec boat, and handed it over to freight specialist GVI Logistics just in time to catch the last ship sailing from New Zealand to the US before the World champs.Caughey is rapt that Parker USA is on board. “It means I can get my team and boat out there and concentrate on beating the best racers from the world’s top countries in jetsprint racing, without having to worry about the details.”Caughey confirms Parker Hannifin is a huge company on the global stage, “But what I particularly appreciate is it’s run by real straight-shooters, which is something I find really easy to deal with, they’re very upright and forthright. It takes a long time to find the right people in the right organization, one that’s at the top of the food chain, but it’s worth doing – their advice and support is hugely valuable.”The equally straight-shooting Caughey acknowledges that racing in America, in two different states two weeks apart, is a hard ask, and he and the team couldn’t do it at the top of their game without Parker USA’s help.“It’ll be cool to race in America alongside an iconic and hugely-respected brand. The nice thing about racing with ENZED in New Zealand, and now ParkerStore, is their focus is our focus – products and service and quality people count, they’re at the top of the list, and that makes it an easy association.” Jeff Falkowski, Marketing Communications Manager for Parker Global Retail Operations, is excited to work with Peter’s team. “Parker’s Enzed brand has had a fruitful relationship with Sprintec in the past and we’re happy to add our ParkerStore support here in America.” “The Sprintec team has been a pleasure to work with and we’re looking forward to the opportunity to help introduce Jetsprint racing to our US ParkerStore customers.”Here at home Caughey values the way ENZED gets right behind his team at events, and he says ParkerStore clearly has that same focus on throwing everything at the battle for that prize: “they’re getting right into it, from printing posters on up.”And no wonder. As Falkowski says, “The opportunity to align with such a perennially winning team is going to help us keep the ParkerStore brand front and center with fans of a very exciting sport.  This partnership has been a win-win for all involved.”