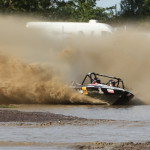 He says his his head’s spinning a bit after months of work leading into the event focused on under a minute of high-speed racing.

Caughey says this was a demanding track, with rocks and stones and shallows to catch the unwary, and the longest they’ve raced – only two boats cut under a 60-second time today, with Peter’s win after he stopped the clock on 57.718 – some 10 seconds more than he’d expect on New Zealand’s shorter tracks.

“It was always going to be a tough competition, we expected both Greg Mercier and Phonsy Mullan to push us hard, and there was a whole list of racers there with really good equipment or a very good driver we’d need to watch.”

Australian Mullan had more than his fair share of mechanical and boat gremlins, Caughey says, “But he persevered and came through with a pretty good result overall, a 59.236, especially considering some of the grief they’ve had, even changing motors between the rounds.”

As for the husband-and-wife Mercier team, they were the only other pairing to cut under the minute, with a 60.807. “A big priority for him in building that new motor, pretty much a sister motor of ours, was to contest this world championship and get the best result he could, and to end up second equal overall in the World has put a great smile on his face, and it’s a well-deserved trophy.”

This track was still really demanding, and this morning Caughey spent almost an hour walking it before racing started, and testing the depth with a technique he learned when he started out on river tracks here. “I literally throw stones into the water to see how deep it is at critical points, to suss out which corners you can cut and which parts don’t have boatable water. You can tell by the sound, by the splash what depth of water there is. It’s a slow process but a good one.”

Caughey said, “This track needs intense concentration and often you’re better to attack it than be too conservative. Yes you need to conserve your equipment for the elimination runs, but if you’re too timid the boat could get off line, if you’re too aggressive, especially with a high-powered boat like these, you can end up arriving somewhere faster than you’re ready for and that can end very badly.”

Caughey’s quick to thank his team and sponsors, “Dave McCallum and Ross Baines, my wife Karyn doing the timing and facebook updates, and keeping the boat clean on such a dirty-water track, and of course Shama Putaranui stepping in to navigate, and doing a great job.”

“Shama and the team worked so hard for this result, it’s been a great team effort at every level, the team here, our engine builders and our support network in New Zealand, and of course our sponsors – ParkerStore, Trojan, Total and GVI, without them we couldn’t have made the start line.”

And then there’s Caughey himself. His Sprintec boats filled the podium this year, and featured in other classes too.

The night before the final, he was working on the impeller for Australian Brooke Dixon’s Group A boat for an hour to ensure she consolidated her second place in the World Group A champs, when it might have been tempting to get some more rest before he hit the start line.

Finally, Caughey can’t say enough about the Americans hosting the event. “Just an example, we needed a TIG welder for a small job and one was found in minutes, with a workshop we could use. The guys here have been so supportive, and given how much slower their boats have proved, they might not have been.”

“I think the sport of jetsprinting will get stronger and stronger here now. People have come up and thanked us for showing them what we do and how competitive we are, and asked how they can get a boat like ours. We reckon the competition will be much stiffer when it comes to defend our title, and the ParkerStore team is really looking forward to that.”