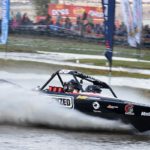 With Wairarapa’s second round of the Altherm Jetsprint championship cancelled after insufficient water in the region, Whanganui has become round two of the six-round series.

It’s set to be a high-powered event, with the world’s fastest jetsprint racers taking to the road on Christmas day to converge on the riverside town.

Defending Mouthfresh SuperBoat champion Peter Caughey says there’ll be a big field on track, with 42 drivers across the classes and 14 of the methanol-fuelled SuperBoats.

“Nick Berryman has shown real form at times with his supercharged boat, and this rotation could suit him, as it gives plenty of scope for the more powerful boats to strut their stuff.”

While the racers don’t get to see the sequence of corners they’ll need to memorise until a few days before the event, the promoter – Richard Murray – could find the home-town home-track advantage helps him to wrestle his ex Hulk supercharged monster round in a quick time, too.

And Caughey promises fireworks when Pip Thompson and David Simmons take to the water. “They’re partners, and they race their own individual boats, both in the top-billing SuperBoat class, so that will be an interesting battle…”

The event organisers have pushed the race start back two hours, with racing expected to finish around 7pm, just short of that dangerous ‘sunstrike’hour.

“It’ll run on the same new format run for the first time at Wanaka, in round one,” Caughey says. “That will give us four or five qualifying runs before the top nine, six and three elimination rounds.”

The Cantabrian says Whanganui delivers one of the best prepared and most spectacular tracks in the country. “Generally it’s been a happy hunting ground for my ENZED team, and we’ll be keen to see if our recent jet unit mods can produce enough outright speed to be competitive against the more powerful Mouthfresh SuperBoats.”

“It’s been seven weeks since we last raced, and the weather is looking okay for race day – not too hot, in the low 20s, though very rough sea conditions are expected for our crossing. We’ll just have to brave that on Tuesday when we’re aboard the briny!”

“We’ve fitted new tyres to the Trojan trailer for it’s first trip up the newly opened Kaikoura road for the first time in more than a year, and we’ll leave our Canterbury workshop Christmas day, and hope there aren’t too many mad drivers or roadworks to contend with.”

While Caughey and his wife, Karyn, will drive the rig and the crew equipment up, the rest of the six-person team will fly through on Boxing day, to give them time with their families, though like the other drivers, Caughey’s own family have got used to celebrating the day early.

But Caughey already has his focus on the remaining five rounds – the Wairarapa round having dropped, an extra round has been fixed for New Plymouth’s Methanex Aquatrack on Saturday, April 14.

As for Whanganui on 27th, “After poor weather at the previous two races and therefore not enough oxygen to make good power, we’re looking forward to good weather and the chance to make the most of our boat’s package. If we can hit that water with everything we’ve got, we can guarantee spectators a battle worth waiting for.”