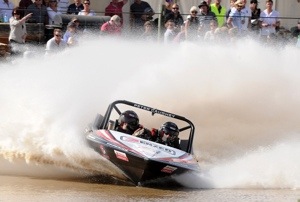 The debut of Wanaka’s new jetsprint track was a triumph for the sport down south but not for Cantabrian Peter Caughey, knocked out of the penultimate SuperBoat round by a navigational error.

Caughey was philosophical as his ENZED team packed up his pit. He retains a 12-point lead heading into the final round at Wanganui, on April 13.

Better still, his Sprintec boat is running well, it’s fast – setting the quickest time of the day by close to two seconds – and he knows exactly what went wrong.

As for the venue, “To debut with this level of support and enthusiasm from competitors and spectators – it’s a sensational start for the new Oxbow track, next to Wanaka’s airport.”

“We’ve known for a long time that spectators down here have been hungry to see jetsprint action in the raw, and they’ve been treated to some serious action today. It’s fair to say they’ll be back.”

As for that fatal wrong turn, five-time NZ SuperBoat champion Caughey say, “There were some parts of the new track we were still learning and I was trimming my lines too much through three and four and damaged two fins there in the last two runs.”

“The fin affected the trim, I could feel the boat moving around, it was quite loose and that was enough to distract me – I missed gate eight, and was out of the competition.”

“Still, we ended up fourth, those are valuable points, we set the fastest time of the day by a generous margin, we were confident we’d have dropped into the 50s, and we’ve had a lot of positive feedback to the ENZED team, the boat and the level of performance.”

“Leighton and Kelly Minnell had a worse day than us, crashing out earlier in the day; we’ve still gained a points advantage between them and us but of course Pat Dillon and Ray Ferguson had a great event.”

“it was awesome to see how elated Ray and Pat were, Ray and Nicky travelled a long way; they always race hard; they turn up with the boat well prepared and deserve the silverware.”

As for the track, the four-time world SuperBoat champ was impressed. “These low islands aren’t boat wreckers, but they’re so well manicured and presented it can be tricky to spot your turning points initially, as you don’t have the normal landmarks to ID your preferred apex.”

But the best bit, he says, is seeing how much the spectators enjoyed it, the great Central Otago weather played ball and the event has been a big shot in the arm for jetsprinting in this country.

“Because of this track the disease will spread, and we had three new competitors today because of this new venue; when Wanganui put its new track in it acquired another 12 competitors, and that’ll happen down here.”

Meantime Caughey’s team and his ENZED, Trojan and Total sponsors will be looking forward to Wanganui. “We were disappointed with today’s result, but we’re very focussed on the championship. It’s good to know we have the performance and the boat’s in good shape with just two weeks to go.”