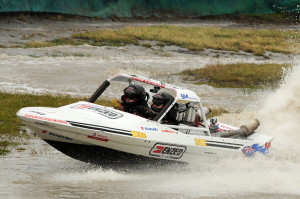 Kiwis logged the fastest times in early qualifying at the opening round of the World Superboat championships at Featherstone today, despite Aussie boasts on social media.

Caughey says, “The Australians are talking themselves up big time and the social media is full of it, but that’s good, if they want to count their chickens before they’re hatched good luck to them.”

“There are some very capable Aussies in this championship here to steal the silverware and some are driving our Sprintec boats, Fonsie Mullen was trying very hard in one of our recent builds and was spectacular to watch, it has a lot of power but can be overdriven.”

His leased boat is one of two run by owner Steve Bron, but his own engine glitch meant the two racers shared one boat for today’s practice and first qualifying round.

“That put the pressure on for us,” Caughey says. “My team had to look after two drivers and one is hard enough, particularly with someone as new to the sport as Steve but it worked out well, there’s not too much of our new paint job missing and the boat’s looking good to go tomorrow.”

“We’re running the massive motor a bit rich, and there’s a lot of power still to tap in there.”

The Featherstone track featured a very tricky track rotation today, “It’s one we’ve never raced before, so we’re pleased Karen [navigator Karen Marshall] and I quickly clicked into our racing roles, she did a fantastic job picking me up on a couple of corners.”

But the pair used a get out of jail card in their second run, nearly grounding before screaming sideways across the timing line.

Canadian Cory Johnson also put on a show for the crowd, launching the boat right out of the water.

Bron is expected in his own boat on Sunday after overnight work on his motor and he’ll be fast; meanwhile Caughey’s sponsors will be happy with both racers in the ENZED boat today.

Sunday will see three more qualifying rounds, then into the top 16 elimination rounds, with Caughey determined to top the tables.