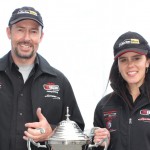 World SuperBoat champion Peter Caughey will defend his title in New Zealand this year, with round one of the ENZED UIM Jetsprint World Championship at Meremere on January 23 and 24.

Ross and Jeremy – his spannermen – are towing the boat on its custom-built Trojan trailer onto the ferry today, world champion navigator Shama Putaranui is polishing the trophy she’ll carry north on her flight from mid Canterbury tomorrow, and the pair are already learning the track rotation, which was released today.

Caughey says, “We’re set for a spectacular weekend of racing, with 21 SuperBoats from four countries, and 13 international teams among the 45 all converging on Meremere.”

And there’s Kiwi honour at stake. Not only is Caughey defending his title – 2016 will be his sixth in the prestigious class if he succeeds – but Kiwi Dave Hopkins is defending his Group A title, and at least 40 per cent of the SuperBoat teams entered are racing Kiwi-built Sprintec craft.

Some of those craft will be raced by American and Canadian crews, but the front-runners are likely to come from the southern hemisphere.

The Kiwis know the terrain, but the rotation will be completely new. “It will be a level playing field,” Caughey says. “The locals may know the general water conditions, but the rotation is unique – right down to the start zone, which was the finish zone just last month.”

The first section is blindingly fast, Caughey says. “Some of the turbo boats will knock out the fastest split times, while boats like ours with naturally aspirated motors will hope to regain that lost ground in the remaining two thirds of the track, which are more technical.”

The Kiwis have put in a huge effort to ready boats and teams – none of Caughey’s crew went to bed before 2.30am on four out of the last five nights, working on his ENZED boat and client entries.

His ENZED, Trojan and Total sponsors have come to the party, “And the organisers have put in a huge effort, prepping the track, building the corporate areas: ENZED getting behind it has allowed us to present the world championship as it’s never been presented, and by the time we get to the Baypark final, there won’t ever have been a jetsprint championship to match it.”

The racing’s going to be hard and fast, “There’ll be action, there’ll be happy people – and then there’ll be some others. We hope to be in the first category come Sunday night, but no one will be able to line up at the start line feeling overly confident. Come flag-drop it’ll be all on.” 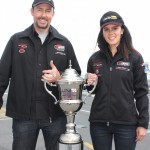 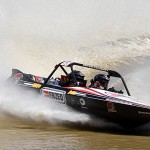