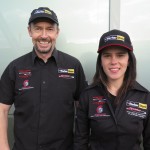 New Zealander jetsprint SuperBoat champion Peter Caughey and his navigator for the world rounds have arrived in Lebanon, Oregon for the final round of the World Jetsprint Championship this weekend after a somewhat frustrating road trip.

For while his tight-knit team have worked their way through America’s famous culinary excesses, Caughey and his navigator, Shama Putarunui have stuck to sightseeing to keep those kilos at bay.

For Caughey’s ParkerStore boat with its mighty V8 engine weighs just 500kg and ever extra calorie will count this weekend when he takes on the world in a bid to clinch his fifth World SuperBoat title.

A round of the USA National Champs will be raced at the same venue on Saturday and the world contenders will complete two untimed practice events on the day to get a measure of the conditions.

Caughey says there will be some unknowns at the event. “We’ve heard third-placed Phonsy Mullan – from Australia – will swap from his twin-turbo to a naturally-aspirated motor, which will leave Kiwi Graeme Hill as the only driver in the top four to use forced induction.”

As for Caughey, he visited Bryant Racing Cranks while passing through LA. “That’s where we obtain the billet steel cranks used by our one-of-a-kind engine. These cranks are the finest racing cranks available – having won more than 14 category championships in the last year, including our team’s ninth New Zealand title.”

Caughey says a special highlight was meeting the legendary Sonny Bryant, owner of the famous business, which employs no branding or signwriting and does no sales. “It just accepts orders – and it’ll then take 12 to 14 weeks to get your crank! It was awesome to meet the people who have been such an important part of the success of the motors in our Sprintec boats since 2004, and it was especially interesting to see a number of its specialist machines using Parker hose and fittings, especially given our support from ParkerStore for our attack on the World title.”

Caughey says fellow Kiwi and defending world champion Leighton Minnell has been working hard to cure his motor of the miss that cost his team valuable points at round one, while the hard-charging Rob Coley is frantically repairing his boat after a spectacular crash at the Missouri round which injured his leg.

“Rob’s a real trouper and is determined that the show will go on, so Sprintec arranged an urgent consignment of parts from New Zealand to get the boat race-ready. I’m confident he’ll race regardless of pain – he’s a man on a mission.”

Peter’s tight-knit team will aim to update the Sprintec facebook page throughout the event, but meantime it’s heads-down hard work to get the boat, its driver and navigator to their peak condition for this final round.