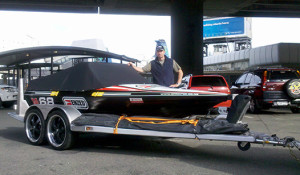 Caughey with the new Enzed Boat

World superboat champion Peter Caughey’s title defence is back on track thanks to a handful of ingenious Kiwis.

The Canterbury racer had ordered a new, high-tech engine block from the US for his ENZED boat, but it arrived late – and with a host of engineering problems his team has worked long hours to fix.

Thanks to several small businesses going the extra mile, the new boat will be ready for the final in Whanganui on February 18 and 19, while superboat rival Steve Bron has leased Caughey his spare boat for the opening round this weekend and it’s being sign-written to suit.

“But what we ordered from the US and what arrived are two radically different things. Fortunately TrackSport Engines in Auckland tracked down each issue, but that often brought more problems.”

TrackSport told Caughey the bronze needed to line the lifter bore is extremely rare. Turns out there’s only one NZ supplier, and it was just round the corner at Christchurch’s AW Fraser. “I talked to Chris there and mate, what a relief. He didn’t have the size or quantity we needed, but cut some huge segments into pieces for us, and six hours of machining later we had the bar size we needed to machine the parts.”

With just a week to go, specialist Dick Chapman committed Waitangi weekend to the cause. “He did an excellent job to the exact spec TrackSport gave him, and at midnight Sunday I drove round to his workshop, collected the parts and midday Monday they were urgent-couriered to the engine builder in Auckland.”

“The folks at GVI Freight in Christchurch have been getting all the parts in from overseas, taking care of documentation and making the process so easy – we always want everything done yesterday!”

Caughey says the last hurdles will be solved by the weekend, just too late to assemble the engine for the opening round.

That’s frustrating, as the new boat took two years of planning. “We expect it to set the new performance standard for the sport,” he says. “It won’t have the highest power numbers but power-to-weight will be right up there. We think it’s the next step forward and we look forward to racing it.”

But you can’t just put an engine into his specialist Sprintec boat, “The engine, jet unit and hull are all tuned to suit each other and there are very few motors capable of fitting this boat. We’ll be racing against most of them. Just a detail like where the oil pump is mounted can affect where the seats and roll cage are mounted.”

Fortunately he had a plan B – “there’s no way I’d miss defending my world title.” Fellow racer Stever Bron has two boats, his spare a Sprintec Caughey built four or five years ago, but with a rebuilt motor.

“It’s heavier than our new boat, with a 600ci (9.8-litre) big block Chev and more power than the boat we raced to the title. I haven’t raced this boat before, but if we can set it up right we should get close,” Caughey says.

The defending champion says he’s looking forward to racing at Featherston. “It’s been a great hunting ground for us. It’s a demanding track, it’s small, you need a lot of boat control and finesse and it rewards a well sorted package.”

A determined Caughey says “A lot of classy equipment is turning up and we’ll have a battle on our hands. Whoever wins it will have to race hard, and we’re not here to keep them honest but to try and win.”