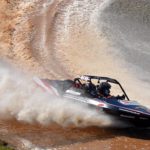 The victors might not have asked permission to slay their beaten rivals, but in terms of spectacle, damage and thrills the ENZED 2018 Jetsprints Stadium Cup matched anything Imperial Rome could have produced. After a two-year break, the ASB Stadium at Baypark in Mount Maunganui was transformed into a course as challenging as anything the competitors had ever attempted.

When the spray had settled, Peter Caughey was the driver holding the Stadium Cup, courtesy of a sizzling final run that lopped around three seconds from his Top 9 elimination-round time…but the multiple national and world champion admits the tight stadium format left no margin for error.

“Instead of a game of thrones, this is a game of attrition. It’s a very challenging venue – you can be knocked out so easily, so the trick is to circulate consistently, and stay out of trouble. That way, you may well get yourself to a final.”

In fact, Caughey’s run to the final was far from a cakewalk. In the first qualifying round he missed a signal from navigator Shama Puturanu and took a wrong turn. The pair thought they had subsequently corrected, but race officials ruled they hadn’t. Qualifier 2 was taken cautiously, to ensure a clean round. Even then, says Peter, he was nearly trapped by a couple of turns that were borderline unraceable, and causing all sorts of problems for the fields.

Because of noise constraints, racing at the ASB Stadium had to be finished by 10pm, so the race controllers made the call to disperse with one qualifier, and run the final from the five fastest boats from the Top 9 instead of the usual Top 9 and Top 6 eliminations followed by a three-boat final. The approach gained just enough time, with last of the finalists hitting the water right on the deadline.

This put competitors under more pressure to get up to race speed earlier, says Caughey. “In Qualifier 3 I went out to race, not super-hard, but she spat me out onto the hardstanding. There wasn’t much damage, but we were left with quite a lot of bits and pieces to tidy up. It’s moments like that that having a good team to depend on is really important.”

Concern over the problematic Turns 2 and 5 saw the racers approach the organisers after Q3 (“At the rate we were losing boats we were worried there’d be not enough left for the final,” says Peter). Changes were made to the corners, making them raceable, if still very challenging.

As if the unforgiving twists of the stadium track were not enough, temperatures of 28 degrees and humidity in the 80%-plus range made it tricky to achieve optimal tune for the methanol-fuelled SuperBoat engines.

And night-time stadium racing under full lights presents another unique challenge, says Peter Caughey. “The tight layout means you’re often driving back through the spray you’ve thrown up on a previous corner that hasn’t yet dropped. With the lights, when you hit something like that you’re momentarily blinded, like driving into the thickest fog you’ve ever seen. Travelling at 120km/h in a channel four metres wide, and knowing there’s a 90-degree bend somewhere ahead, you don’t need the harnesses to keep you in the seat!”

Caughey had no further dramas after Q3, eventually winning the five-boat final from Tauranga’s Aaron Hansen and Wairarapa’s Scott Donald, who posted his best-ever result in SuperBoats. Nick Berryman from Rotorua was fourth, while Aussie Darek Sygidus, running one of the new Sprintec boats developed by Peter Caughey Racing, had a DNF.

Peter believes that stadium events like the ENZED Cup have a huge future in jetsprinting. “It takes a lot of effort at the infrastructure level, but the results are unbelievable. On Saturday night, 12,000 spectators turned up and they were absolutely thrilled. The compact layout and the fact they are sitting higher gives them a perfect view of the action. And from a competitor perspective, the level of enthusiasm makes for a great crowd to race in front of.”