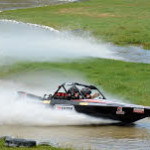 Peter Caughey had the best and worst of days at today’s opening round of the Suzuki SuperBoat Series at Wanganui’s Shelterview track.

The defending New Zealand and current World SuperBoat Champion has been tuning his Sprintec boat since the moment it returned from the US bare months ago, and it was flying today.

Caughey set the fastest time in every round against 10 top teams, and his quickest – a 45.38 set in the top 12 elimination – was never beaten all day, the closest a 46.73 from eventual winner Pat Dillon in the top eight elimination.

With the best of the rest often two seconds adrift, the event looked to be Caughey’s for the taking until disaster struck. He was setting a blinding run when his engine cut without warning, his ENZED boat speared off the track and got airborne, then came to rest beneath the spectator banking.

Caughey was gutted. “We’d quickly got up to pace – the team, the boat, everything, we were on the case. We weren’t taking silly risks, we were in the top five and it wasn’t a hero run, we were setting a strategic pace to secure a place in the final. It’s a six-round championship, and you have to go for the points.”

“But today proved it’s never in the bag until the final flag, and it wasn’t to be our day.”

Caughey and his crew were quick to check the boat over once it was back at their pit. “The reality is we don’t know what the problem was. We thought it was a blown ignition spark box, an $800 fix, and some damage to the hull – but from what we can see that’s easily fixed and the jet unit is good and ready to race.”

“But with the new spark box on there we tried to crank the motor over by hand and it’s not looking promising, it may be a mechanical failure. There’s no oil in the bilge, that’s good news if there is any, but something that stops that motor as suddenly as it did means a heck of a lot of pain in there.”

Still, Caughey paid tribute to the organizers, who put on a great event in front of a massive crowd. The natural amphitheater with its sheltering trees guarantees a spectacular view of the action, and there was action aplenty, with crashes and smashes as well as a few blistering times.

But the real crowd pleaser was the fact the day’s SuperBoat winner was a local lad, Pat Dillon in the 1500hp Hulk putting in a wild final run to take the chequered flag. Peter Huijs raucous rotary screamer came second, with Leighton Minnell in third.

But as the top three took the podium, Caughey was already cancelling his ferry tickets back to his south island home.

“Instead of a leisurely trip to Wellington it’s a fast trip to Auckland. The boat’s off to the doctor, to TrackSport engines, to see what’s gone wrong.”

With just four weeks until round two at BayPark’s packed stadium, he could have his work cut out to get running.

Still it could be worse, Caughey points out. “Pat is one of the guys who started this track. I don’t need to spend a bank of money for him to have a good day, but it was great to see him win here, all our customer boats are in one piece and so’s our team.”

“Here’s hoping we’re back on the water, fighting fit and ready to set the fastest times again by the time Bay Park rolls around on January 24/25.”

Provisional results, Round One, top 10