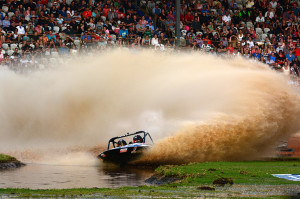 Defending New Zealand SuperBoat champion Peter Caughey had the best and worst of days, setting a blinding time in the top-12 eliminations at round two of the NZ SuperBoat champs, then DNFing from the top eight after a navigational error.

But the super-competitive Caughey remains upbeat, and not just because he still netted fourth after four other top-eight contenders crashed out.

It’s the success of the world’s first stadium jetsprint that has him buzzing, with a 16,500-strong crowd roaring to the rafters at the high-energy action on track for the ENZED V8 Jetsprints at ASB Baypark.

“Lots of stadiums worldwide are looking for new, fresh entertainment, maybe we’ve got one of the drugs they need. It’s a credit to all involved that it took place, and that it’s been such a success,” Caughey says.

As for his DNF, he says he’s never crossed the start line less confident of the corner rotation.

He reckons several factors contributed, not least that he put time into helping sort issues with the new track which had caused crashes in early qualifying, leaving Karen Marshall alone to learn the new corner rotation, instead of developing their usual navigational tag team.

And there was the interruption to his usual routine as the boat entered the water, with other contenders’ mechanical issues as the curfew loomed prompting organizers to bring Caughey forward. “I usually spend those last few minutes running through the rotation in my head and couldn’t do that this time. That, combined with the interruption to my usual routine, put me off my stride.”

“Karen assured me she had it, but with choppy water caused by our own boat after we slowed, I didn’t want to risk throwing my Sprintec boat away and not being on top form for the next round.”

Faced with a navigational issue Caughey normally refinds the rotation and logs a time; but today, with choppy water and a second error, he didn’t do that. “In the end it made no difference, but if one other person had a DNF after our run, just finishing would have put us in the top three.”

“As it is, we got a get out of jail card as Phonsy Mullan won the last round but was eighth today, and the other contenders crashing put positions up based on qualifying times, which means a valuable few extra points for our Total-Trojan-ENZED team that pitches us into joint third overall with Phonsy.”

Overall, Caughey reckons the day’s a success. “ENZED must be stoked it got in on the ground with the naming rights to the successful stadium event, and though our ENZED-sponsored team didn’t log a win, there’s always next time,” Caughey says.

Round 5, April 5 (under lights) Wanganui

Provisional Championship points, top five after one round