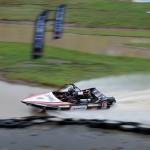 Navigation of these tight and narrow lanes can prove a challenge: Peter Caughey nails it at the Naki 500 (photo Ian Thornton)

Peter Caughey is braced for a nail-biting final of the 2016 Suzuki SuperBoats season, with four points separating the top four – and four points to gain if he’s to claim his 10th New Zealand title.

“There have been some crazy results,” Caughey says. “We’ve won three events – more than anyone so far this season – yet we’re sitting in third, and that’s how it goes. It certainly adds to the excitement of it, and there’s no room for complacency going into the final given the results going into the rounds prior to this. There’s no-one who hasn’t had a roller-coaster season, and there’s a story around each one.”

He’s not kidding. What with breakdowns and crashes, front-runner Glen head has swung between third and eighth, second-placed Leighton Minnell – like Caughey, a former world champion – between second and seventh, Caughey has three wins and two ninths and Rob Coley’s swung from third to tenth.

Caughey says, “We need to finish first, with Glen Head or Leighton Minnell fourth or lower. And with the way this season has gone, it could be anyone atop that podium come Sunday.”

So his ENZED crew have replaced both $12 reverse switches – one of which failed in round five – “and the boat’s had a good dose of TLC in preparation for the big final this Sunday, including a complete change of Total oil.”

The team has just finished fitting another performance feature which he hopes will extract that last bit of performance from his ENZED boat, and he and his navigator, Shama Putaranui – currently joint first in the navigator championship – are learning the new track rotation.

“Featherstone is a compact track, probably New Zealand’s most technical, with only one straight. This circuit has so many little reefs, twists, turns and narrow channels that it’s easy to out-race yourself, and the rotation we’ll race includes a couple of tricky bits and some technical aspects, but I think it will be quick, and it offers plenty of opportunity for the SuperBoats to strut their stuff so long as the drivers choose their racing lines precisely.”

Caughey is looking forward to a great race at a track which should suit his ENZED boat. “We’d love to win the final and it’d be an amazing result if we were to win the overall championship. But Glen and Leighton are in a better position to achieve that, with Leighton three points ahead of us and Glen four points ahead…”

Caughey is not the only one doing the maths. Glen has been rebuilding his motor, and, “We hear most of the SuperBoaters have been predictably busy repairing and preparing equipment for the final, and it’s looking like being a pretty amazing race – with only four points between the top four, any driver mistake could easily change the final placings.”

New ENZED crew member Jeremy has even prepared a spreadsheet for the overall points, and after each lap Caughey’s wife, Karyn, can enter the results so they can immediately see the implications of any early eliminations.

“There’s everything to play for, but for now all we can do is pack up the boat, load the Trojan trailer, and head north for the ferry,” Caughey says.