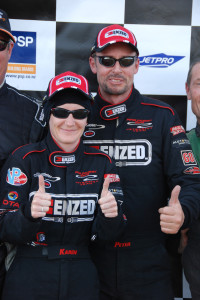 ENZED has announced it will step up to the jetsprint plate this year, sponsoring both the ENZED V8 Jetsprints at ASB Baypark stadium, Mt Maunganui, for round two of the jetsprint championship series on January 25, and national Superboat champion Peter Caughey’s team as he makes the push for another NZ title, heading into the 2014 World Championship rounds.

Peter’s really fired up by the news. “We’ve got a really exciting season ahead. The new venue coming on stream at Baypark is a world first. We’re digging up the infield of ASB Stadium Baypark and it’s a huge effort, but it’ll be spectacular. It’s a fantastic facility, and it’ll get bums on seats. We’ll be racing under lights on Saturday night, with these big methanol motors blowing the odd flame from their exhaust.”

“And better yet,” he says, “we can ensure there’s an ENZED boat racing at an ENZED venue.”

ENZED marketing manager Shaun O’Dea says, “ENZED has supported New Zealand Jet Sprinting for over a decade and it’s great to see that the sport is still pushing the boundaries.”

“Peter Caughey’s professionalism, his attention to detail and his willingness to take his boat to our branches to meet staff and customers all display an attitude that fits well with the ENZED brand. It’s thanks to Peter’s help that we’ve got in behind the world’s first stadium jetsprint event at Baypark, too. With his six World titles and eight New Zealand titles, Peter’s a consummate professional and always represents our brand well.”

As for Peter, he can’t say enough about the support ENZED has given his team over the years. “It’s been a major factor in our ability to continue to win championships,” he says.

“But better than that, a commercial relationship has seen us establish friendships with a wide range of people across the ENZED network and its customers. It’s quite unusual to get to know a business and its staff so well, and it’s something we really value. And its product, success and professionalism are a good fit with our team.”

“You only have to go to the Auckland round of the NZ champs to see the effort some of the ENZED network puts in to entertaining its clients and guests, and it’s heartening to literally see 100s of them arriving and really enjoying their day.”