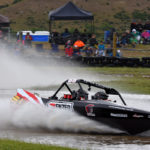 Peter Caughey charging hard at round one, now chafing at the bit until Wanganui
(photo by Ian Thornton)

The cancellation of round two of the Altherm Jetsprint championships in Featherston due to dry weather has a hidden silver lining for some teams.

Due to run on December 2, the event may have to be run later in the season at a different track.

But that could be good for the very competitive Glen Head, expected to feature heavily on the podium this season until back surgery over the winter.

It’s also good news for Ted and Dezzi Sydgidus of Melbourne, who have the bit between their teeth after a strong result at round one. Defending champion Peter Caughey reports, “They’ve had their motor on the dyno at Tracksport Engines, so we expect to see those boys flying at Wanganui”

Having prepped the ENZED SuperBoat for this weekend, Caughey’s Sprintec crew are now busily putting the final touches to an exciting new Group A boat for a fast-charging client keen to contest the NZ Champs.

That’s the silver lining in a frustrating announcement for not only the teams involved, but the Featherston officials.

Peter Caughey says Featherston is one of NZ’s oldest tracks and it was due for an overhaul. “This off season the club put a huge amount of effort into altering the track, adding another island and changing the start-finish chute.”

It was great to see all that effort going in, “And everyone is gutted that they won’t get to see it in action this year, after all the time and money invested.”

His ENZED crew is equally frustrated. “We’re preparing new jet unit equipment which we had planned to test in the heat of competition at Featherston. It’s a real driver’s track with a great range of technical corners and sequences, a great venue for us, really.”

It’s now a long gap until the next round, in Wanganui on December 27, “And judging by comments from jetsprint fans on social media, we aren’t the only ones who are disappointed.”

Caughey says, “The JSA executive have had a busy start to the season, with TV and sponsorship deals being signed for the sport, and now another hurdle has been thrown before them. But we’re confident they’ll get it sorted, and look forward to a very competitive next round, at Wanganui.”