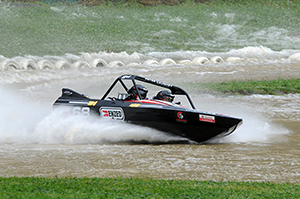 There was drama aplenty at round two of the New Zealand SuperBoat champs at Featherston today, with sunstrike upsetting the final order, a leaking track causing low-water crashes and a timing equipment glitch.

Five-time NZ SuperBoat champion Peter Caughey finished second despite setting the day’s fastest time in the elimination rounds, after he rounded the final bend to charge at the finish line straight into the setting sun.

“I was hoping I’d knock over a high or mid 48 in the final but in the end it was just a mess, staring into the low sun I clipped a couple of islands, the boat got loose and as I powered my 570 MegaMonster motor at the finish line all I could see was one pole – there were two, I couldn’t tell which one it was and took a punt, we skimmed land and popped into the spinout pool; I wouldn’t care to do that sort of racing again.”

That momentary indecision dropped Caughey’s ENZED boat to second place, behind Leighton Minnell. “He must have had darker glasses,” Caughey quips, “but he said later he’d had the same issues. The Wanganui promoter warned them and suggested they take the boats off the water but the race carried on. Those last two runs were very dangerous and it’s something the sport will have to address – racers not only have a lot of money invested, but their necks.”

These thousand-horsepower methanol-fuelled boats can accelerate from zero to 130km/h in under 2.3 seconds, they have no brakes, and if the jet bounces from the water, no steering either.

“There were some spectacular crashes today,” Caughey says. “The track had a leak, the promoters were doing their best; they were pumping river water in all day but the water was shallow and it caught racers out.”

Lower Hutt’s Ray Ferguson was fast in the top 12 with a 51.67-second circuit, “Then he lost it on one of the fastest parts of the track, shot across the grass and into a safety ditch between the spectators and the race track, not a nice way to finish your day.”

And Wanganui’s Rob Coley crashed hard in the early rounds, raising fears his Sprintec boat had been written off. “We helped him patch it up and he made the top six.”

Six – not the usual five? A timing glitch in Caughey’s top eight run meant no time set for the Canterbury racer. He’d been setting fastest times – the only racer to circuit in under 50 seconds – but got through to the top five elimination round as a sixth boat, an accepted result when there’s a timer malfunction.

Caughey may not be pleased with his second-place finish “the fastest time of the day doesn’t mean much if you don’t win the final,” but he is pleased with his Sprintec boat. “We’ve done a lot of fine-tuning, but we’re sneaking up on faster speeds – though we had a ring gear for the starter motor fail, fortunately early on. It’s always a risk with these high-power alcohol-burning motors, they don’t like being started but the ENZED team’s crew is great; Dave and Ross had it apart, the new ring back on and the motor back together inside 40 minutes.”

Caughey’s focus now is the Meremere round in five weeks. He’ll have the boat back on the Trojan trailer, haul it home to Canterbury and get to work with more fine-tuning and a fresh batch of Total oil.

Then the team returns north. “Meremere is always a hard track to race and you’ve got to be on your game. I’m pleased the first time we raced this boat was Wanganui not Auckland, but by the time we get there we should be ready for it.”

“It’s dirty water but a great track, and anyone who wins there deserves it.”