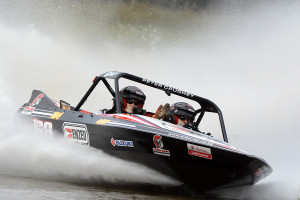 Drama for defending SuperBoat champion Peter Caughey at the fourth round of the Suzuki SuperBoat champs today, after he set the fastest time in the top five – then spun out of the top three.

The event had started with worries around the cyclone coming through and a need to set contingency plans, “We broke the drought for the Hawkes Bay,” Caughey quips, “but at least there was more water on the track.”

Hasting’s not an easy track, he says. “It took four laps before I had enough confidence to really attack the track with consistent flow rather than feathering the throttle, though our ENZED boat was still setting fastest times.”

Phonsy Mullan had flown from Melbourne to race and trailed by over half a second, “we were making changes to suit the track rotation and water conditions.”

Into the top five and Caughey set the fastest time, the only racer to go under 45 seconds, with a 45.94, then Phonsy had a mechanical glitch, and had to pull out.

The racers had already had problems with wind-blown spray affecting visibility though a tricky set of turns and it was that which caught Caughey out. “We were banging through there looking for a mid-45 and just couldn’t see – when the spray cleared we were about to hit.”

“We launched out of the water, shot off the track backwards and helicoptered for long enough that I switched the motor off and hit the isolation switch before we landed in a spray of grassy mud. The crowd went wild, and we got a greenstone trophy for the most spectacular exit, but I don’t want another one.”

Fortunately his Sprintec hull was barely damaged and Caughey’s ENZED team is already making plans for round 5, to be held under lights in Wanganui on April 5.