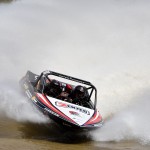 SuperBoat ace Peter Caughey returned with a bang at round two of the Suzuki SuperBoat champs at Whanganui today.

With just 10 days to rebuild his boat and body after a spectacular round-one crash, his ability to return to form was by no means certain.

The Sprintec hull had needed reshaping, had its driver side cut out and replaced, and a lot of other work done, much of it round the clock, and it was only finished on Christmas day – just hours before leaving Canterbury for the ferry north to round two.

Caughey says “It didn’t take long to get back into our stride, and by a fairly tidy fourth qualifier we’d hit the fastest time. That said, it wasn’t about the lap time, but getting our mojo back after our big crash two weeks ago.”

Caughey paid tribute to his navigator. Shama Putaranui may have a world championship under her belt, but she’s still young, its early days for her at this level, and a return to the boat after that terrifying 120kph barrel roll, and to return on top form, was never a given.

“This result is much more than a win, a trophy or a healthy dose of championship points – and it’s very encouraging as we now continue our focus on the buildup to the world champs, which kick off at Meremere in late January.”

Tonight the team is celebrating victory – Caughey is giving this trophy to his new crew chief, Ross Baynes – and tomorrow Jeremy, Shama and Ross start a well deserved one-week holiday break while Caughey and his wife, Karyn, drive to Auckland to deliver the ENZED 570 motor to engine-builder Tracksport Engines, which has recently returned from the Performance Racing Industry Show in Vegas with fresh ideas and new performance parts for the motor.

Then it’s back to base, to further tune his own boat and work on repairs to some of his competitors’ craft.

But Rob Coley’s boat may not be one of them. Coley’s crash could be the worst these experienced SuperBoat teams have ever seen. He shot past the timer, hit the tyre banking, speared up it, rolled, snapped the fencing upside down with his roll bar and spun into the trees, snapping branches as he went.

Navigator Kelly Minnell sustained a broken nose, and put a tooth through her own lip, “She’s one of the most experienced women in motorsport, she’s done a lot of racing in a lot of disciplines, and she’s gutsy, but even she must have been a little shaken,” Caughey said.

Still, she walked away from the wreck, as did Rob Coley, but, “I don’t think the boat will be back,” Caughey says – and as a boat builder, he should know.

“I think the hull is 15c a kilo recycling, but everything inside it is recoverable, the roll cage, the engine, there’s some carnage in the jet unit which won’t be cheap, but fortunately he has a spare boat, and his good motor may be ready for the world champs.”

What caused the crash? Caughey says it’s hard to pin down. “The boats are becoming missiles, as we saw today. It’s like putting a formula one car on a supercar track, if you’re 20 or 30 per cent faster it’s a whole other world. But it’s fair to say there’ll be some changes to the finish sequence for Whanganui in future, given the number of SuperBoat crashes this afternoon, but that’s all progress.”

Caughey says the boats have gained so much performance in the last two to three seasons that it’s a constant challenge for drivers and race controllers to manage the power – and the risks involved.

Still, alongside the 28-degree heat, the thrills and spills made a blinder of a day for the spectators, despite the occasional delay.

Caughey’s now head down, bum up getting his ducks in a row for round one of the world champs. “Today’s win is a really encouraging springboard to the worlds. We’re back in the groove, and the boat has enough in it to do the job.”

“We’ve put a lot into the motor programme, the equipment is landing now, we’re looking forward to fitting it and doing some final fine-tuning of the jet.”

“Come Round one of the worlds at Meremere on January 23 and 24, we’ll be ready.”