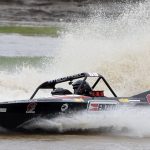 Peter Caughey got through to the top 12 at round one, before the SuperBoat class was suspended due to rain. All top 12 qualifiers therefore start this weekend on equal points. (Photo courtesy Ian Thornton)

coming days to get his Sprintec SuperBoat to round two of the Altherm New Zealand Jetsprint Champs at Meremere, on Sunday, February 5.

It’s been six weeks since round one, when the SuperBoat class was rained out before the top 12 eliminations, and all 12 racers will start this round on equal points.

“The points on offer were divided equally between all those who made it into the top 12, so it’s a totally level playing field for the sharp end of the contest at Meremere,” Caughey says.

But first, the ENZED team has to make the long trek from its Canterbury base.

With Highway one north closed, Caughey says, “We’re all good for the long trek heading through with our Trojan-equipped trailer. It’s a fair journey up via the Lewis pass, we left Wednesday and we’re taking the ferry Thursday, arriving in Auckland in time to visit our sponsors on Friday, with a full day planned.”

On Saturday he hopes to ‘blood’ his new navigator, Louise Blythe of Wanganui.

“Louise is experienced and was highly recommended,” Caughey said after the unexpected retirement of Shama Putaranui. “We’ll check out the track rotation on Saturday, fit Louise into the boat, and make sure she understands our procedures.”

A large field of SuperBoats is expected for the Meremere round, and Caughey says it’s a great track to spectate at “if you want to see the highest outright boat speed of any track in the country.”

“It’s a great venue to race at, it never offers an easy victory and you have to be on your game,” he says.

“If you’re chasing hero status, that’s where you’ll find it, but you need precision driving to convert outright speed into winning times as it can be an unforgiving track.”

The ENZED team hopes for a technical rotation. “That would favour our boat, but given the style of track the turbo boys are likely to be strutting their stuff. We’ll have to see how it all pans out by Sunday evening.”

Caughey’s crew has stripped the boat out and tidied a few little things between rounds, “to make it a bit more user-friendly,” he says, “And it’s been nice to have the extra time to do that.”

Especially since the team’s primary sponsor, ENZED, is expected to have a huge corporate presence, “We’re expecting about 400 ENZED guests lining up to cheer us on,” Caughey says.

“We can’t wait for that flag to drop!”