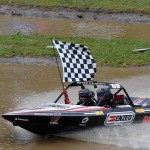 After a nightmare first round of the Suzuki SuperBoat Championship series, Canterbury superboat ace Peter Caughey is back on form – topping the podium for the second time this season, and this time at the most technical track of the year.

Points leader Glen Head had thrown down the gauntlet, with the two racers battling over the fastest time in the qualifying and early eliminations rounds.

But Glen crashed out in the top five, which blows the championship wide open with three rounds yet to run.

Caughey said later that he enjoyed racing a round without mechanical gremlins. “We were fairly busy for the first hour or two helping customers get set up, and then we got stuck into our own racing.”

Taranaki is a brand-new track, “It’s the most technical track we’ve raced in modern times, and hugely demanding – very like the early tracks dug out of river banks. It was very small, with nowhere to go and with diminishing water levels and increasing reefs and shallows throughout the event, but it was the same for everyone, and we knuckled down and got on with it.”

Still, the tight circuit made for some very exciting racing. “You had to have a good navigator as the driver could be faced with two or three crossing wakes between one corner and the next, and you’d have to concentrate on keeping the boat under control, and trust that the navigator had got it right.”

Caughey paid tribute both to navigator Shama Putaranui, and to his ENZED crew, who quickly got the boat tuned for best response at the new track.

He also acknowledged that the sport is lucky to have so many talented people in charge of the events, folk who can set a level, and safe playing field. “The venue is a little undersized but it produced some great racing, thanks to wise decisions by the race controller, Erik Hoeksema, to ensure the event ran smoothly.”

Caughey reckons some track tuning is likely before the SuperBoat circus returns, “But that’s not unusual. Look at Auckland, there were issues at first, and it’s a great facility now. There’s so much that Leighton and Kelly Minnell – who built the track – did really well in the limited space they had. And Taranaki really turned it on, there was a big, responsive crowd and a huge turnout of corporates, not least from the local ENZED crew.”

What about Caughey’s competitors? Glen Head is fast, but had looked a little loose at times. Dave Hopkins was Mr Consistency, and finished second, while Graeme Hill, in third in a Sprintec boat, has experimented with his boat and got to grips with it, “And look at the results.”

From a championship view, Caughey got the result he needed. “We needed a win, and we hoped for a bit of a distance today between us and Glen, the championship leader, and Leighton Minnell, to bring us closer in the overall standings – and we got that. So the championship battle is all on: I can’t wait for Hastings, in March.”