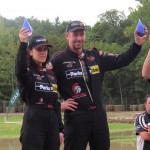 The seasoned racer was faced with a complex track at Bricks Offroad Park, with three laps each taking a different route around the seven-island course – with a total of 30 corners to remember before blasting across the finish line.

With the course a new one for the ParkerStore team, the practice rounds were vital to learning the rotation, and where wakes and shelving island edges can catch out the unwary and send these powerful lightweight craft airborne.

Caughey took a wrong turn in final practice to put Kiwi hearts in mouths, but turned in a blinder for the first timed qualifier today, crossing the timing line with 44.69 seconds, over a second ahead of his nearest rival, fellow Kiwi Graeme Hill on 46.07, himself just 100th of a second ahead of Australian Ted Sygidus/navigator Marcus Kasprzek, on 46.08. Close behind came fellow Kiwi Daryl Hutton/Michael Perry on 46.97, then Greg Mercier/Dorinda Mercier (47.29), Australian Phonsy Mullan/Devon Mason and Kiwi Roby Coley (both 47.33), Australian Darek Sygidus (47.57), Leighton Minnell/Kellie Minnell (48.91), and Chris Munro/Brent Scammell (51.05).

But it’s early days yet: tomorrow sees the final qualifiers and the elimination rounds for race one, with the second and final world round in two weeks.

With temperatures topping 30 degrees Caughey and his team – including navigator Shama Putaranui – had taken the ParkerStore boat out to nearby Lake Wappapello the morning before arriving at the track to tune the motor to local conditions, and will now be glad they did so. Clearly it’s given them a head start.

Missouri is 17 hours behind NZ time

Round one – August 16-17, Bricks Off Road Park, Poplar Bluff, Missouri,