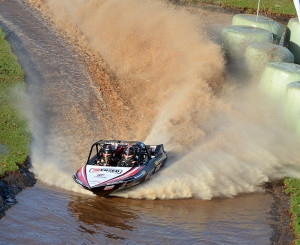 Defending superboat champion Peter Caughey heads into the third round of the New Zealand SuperBoat championship in joint third, and determined to turn his back on navigational errors that dogged his first two rounds.

“It’s fair to say there’s a bit of unfinished business for my ENZED team,” says the six-time New Zealand and four-time world champion.

With several laps of the complicated high-speed tracks completed in under 40 seconds, a split-second navigational error can make for disaster. The team reckons that as the Sprintec boat gets faster and Caughey and navigator Karen Marshall sit lower, it’s simply harder to see the entry to the corner, “So we’re working on more efficient hand-signal communication to offset that,” Caughey says.

He’s pitched head-to-head with Phonsy Mullan, joint third and along with Caughey a top contender in these powerful, 1000 horsepower-plus methanol-fuelled boats.

“Dave Hopkins has proved consistent over the last two events and is holding first – we’ll need to see how he finishes at Meremere, where there’s more pace. If he does well he’ll carry plenty of points through to the final.”

“And Graeme Hill in second so far is a dark horse, he’s gaining confidence in his twin-turbo motor and his boat will be reasonably well suited to the race on Sunday.”

The track rotation around the complicated network of islands is similar to that of the 2008 world champs – it’s very fast, very demanding, and with its long straight it will favour power.

But Caughey says that’s offset by the tight hairpin at the top end, back over disturbed water, “and the mid-section near the end we go through a double-ess sequence on a diagonal, which can be very challenging.”

“Some of the fast sections at Auckland lead on to tight demanding sections, and that extra speed at the end of the straight can just mean you crash a little sooner than the next guy, which will be a challenge we’ll all face, but it’s one that could favour our Sprintec boat,” Caughey says.

“We’ve gained top speed this season, but our ENZED SuperBoat is still really nimble, it handles well and it’s forgiving and very responsive. We may give away a bit of top speed on the open sections, but expect to recover that ground through the more technical segments.”

“We’ll all need to be smooth and efficient to be competitive, and precision will play a big part in determining who makes it through those vital elimination rounds.”

The Canterbury-based Caughey’s concentrating on keeping his fabled cool heading into the event. “We don’t have much pre-event sponsor activity with the ENZED, Trojan and Total guys who support us, the boat’s in the north island so we don’t have too much driving, and Sunday morning we should be feeling totally ready to race.”

Caughey’s expecting a huge crowd at Meremere after the success of Bay Park, “Thousands went away hungry to see more. Fifteen or 16 SuperBoats, all with 1000-plus horsepower – not to mention the other classes – makes a staunch recipe for serious entertainment, and they’re all ready to put it on the line for a good result.”

Qualifying starts at 9am, but the best action is from lunchtime through to 4.30 during the elimination rounds, leading into the top-three shootout.