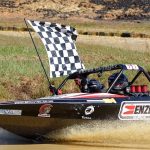 Defending SuperBoat champion Peter Caughey threw down the title gauntlet at round two of the MouthFRESH Superboat championship at the weekend, with a decisive win on a fast and flowing Meremere aquatrack — though it wasn’t without its challenges.

Round one of the Altherm NZ Jetsprint Championship had ended with the top 12 in the MouthFRESH SuperBoat class on equal points after rain stopped play, and today was the first in which the powerful line-up could properly strut their stuff with boats they’d worked on over the off season.

The route the boats take around the track’s many islands changes at each event, and Caughey said later that this time the rotation made for “a serious drag strip.”

“Boy, was it fast, and I did wonder whether we’d have the sheer power to get the job done. The track lent itself to the twin-turbo packages, but we kept making minor adjustments to the jet unit and motor, to get the most out of it.”

The hot weather – temperatures under the pit tent soared to 30 degrees – the air pressure helped motors like Caughey’s to make a whisker more power. That heat makes racing in full fire suits with seats just centimetres ahead of the giant motors something of an endurance feat for drivers and navigators, but with a big crowd and a power boost, Caughey wasn’t complaining.

Meremere is a clay based track. “It was immaculately prepped, as we now expect from this venue,” Caughey said. But that clay means that the more boats race, the muddier the water gets. The mix gets denser as the day goes on, “The boats sit higher, and feel a little loose and the smart teams fine-tune to try to set up the ultimate boat for these conditions, which is where an experienced team like my ENZED crew really shines, they worked their guts out, and were rewarded.”

But the day didn’t go smoothly. “We had a bit of a scare at the end of our top eight run when one of the electronic ignition boxes started to fail just after the finish line…”

The boat had to be towed back in. Fortunately they started the motor up once it was on their Trojan trailer as the crew didn’t think there was anything mechanically wrong.

“It ran, and we were making fine adjustments to the idle, but when no-one was touching the motor at one point it just stopped, so we realized it wasn’t the fuel, it wasn’t the idle, it was the ignition.”

With only minutes to go until the boat was due back on the water, the crew zipped back to the tent.

“Fortunately we carry spares. Phil from Tracksport Engines was also there to give us a hand, so we put a fresh one on and happy days, we were off like a robber’s dog.”

Our team is fantastic, we all swap jobs, so the navi and timing crew cleaned the boat while the mechanics got on with what they had to do, and I’m very grateful for that.”

Doubly grateful given the level of competition at this event.

And, “With this style of track it was hard to know who would rise to the top of the points board. Glen Head was looking fast and his boat was handling nicely.

“Second-generation Blake Briant has to be well pleased with his result, and Nick Berryman, he’s raced a long time and had a huge crash last year, so it’s a nice reward for him to return and be at the pointy end of the field.”

“Rob Coley had a new boat, he didn’t have his new motor so was a bit down on power but did a great job.”

“And commiserations to Sam Newdick, a young newbie who was one of the pacesetters at the start, before a minor mechanical problem caused some insurmountable problems, he did a few runs, but the motor was too sick to continue.”

As for Caughey’s first race with his new navigator, Louise Blythe, “There’s always a risk in introducing a new navigator, we can’t be sure they’ll be happy in our boat and in our team.”

Moreover, Louise had never been in a SuperBoat before, “But we couldn’t have asked for a better start. We’d spent a lot of time on the Saturday making sure the helmet, seat and harness suited her and talking through our procedures, and she’s a very quick learner,” Caughey said.

“We made a few little adjustments during the first two runs to what she was doing, she adapted really quickly and I am impressed and surprised at how comfortable I was racing that final with Louise, navigating in a SuperBoat for the first time.”

All that’s left now is to reload the gear, the boat and the supply of Total oil onto the Trojan trailer, hop aboard and start the long trip to the crew’s south island base, to prepare for the next round, at Waitara on February 26.

Preliminary results, top 10, Meremere, round one of the MouthFRESH SuperBoat championship