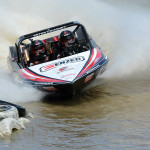 Peter Caughey and Karen Marshall back in Caughey’s favourite boat, and holding second heading into the final round (photo, Ian Thornton)

His mighty motor broke a crank at round one, and he’s raced a leased boat while the engine’s been at the builder ever since, as parts and orders have flown between Auckland and the USA.

But it looks as if he’ll be racing the rapid ENZED craft at the final round, in a bid to make up the nine points needed to leap from second, to the top of the season podium.

The engine’s making more power than ever before, but was still on the Tracksport Dyno late last night. It’s being air-freighted to Caughey’s Canterbury base today, for arrival this afternoon – “And we’ll get it in the boat by Friday midday, fitted out and good to go.”

But that’s not the end of it, for Caughey has to check the whole package has been repaired and is back to its best before he heads north towards the Friday night ferry, and he’ll test it on the Waimakariri River before loading the Trojan Trailer and starting the trek to Featherston.

“Engineer Dave McCallum – the ENZED team’s longest-serving member – will be poised to get to work, everything that can be prepared has been but it’ll be nice to do those shakedown runs on water we’re familiar with, make sure the fuel mixtures are in the zone, and the repairs the hull and jet unit needed after the crank broke at speed and we clipped the safety wall are all up to scratch.”

Caughey says the team’s not expecting any more grief, “but the bottom line is race day is Sunday, we hope to get through to the ferry Friday night, but if we have to keep working and drive through Saturday, so be it.”

Caughey is looking forward to racing this boat again, “It’s easy to get up to pace quickly, it’s fast, and we don’t expect too many issues.”

The pressure will be on points-leader Pat Dillon. Rob Coley has won the last two rounds in a boat that likes technical tracks like Featherston, and he’ll be confident, while Caughey will be in his favourite black boat, “And Leighton’s Sprintec package can be expected to go well here as it also likes a technical track, plus some guys will be back out after a break from racing, which could mix up the points a little.”

Dillon has a healthy points lead, “But the championship isn’t in the bag until he survives the first two elimination rounds. He’ll likely take it easy until he does, and then unleash the full power of his supercharged Ford, just to see what it’ll do once the pressure’s off,” Caughey says.

Meanwhile Caughey will aim for top spot too, as Leighton – third by a healthy margin – could still make the ground if the new motor doesn’t perform as expected.

“Quite apart from the result on Sunday, we want to get some race time in this boat, to make sure it’s back to its best, and so we can gauge the opposition and see what gains they’ve made during the season, to give us an idea of how we’re shaping up for next season.”

Caughey says Featherston is a great track for spectators. It’s compact, so there’s a good view from all the embankments, the track rotation is busy and it always produces good racing.

“The pits will be open for half an hour before one, and then it’s all on, with the final expected to be over by around 4.30 – a tricky time at this time of year, but the finish line is well placed to avoid sunstrike issues at full noise.”

Caughey says “It’ll be my navigator’s last race, as Karen Marshall is retiring, so it’s great we’re back in our new boat. It’s going to be a hard-fought final regardless of the championship result, and I’m looking forward to it.