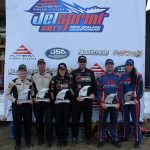 Peter Caughey won the final round of the MouthFRESH SuperBoat class at Wanaka’s Oxbow Aquatrack this weekend, and with it his ninth New Zealand SuperBoat Jetsprint Title, despite the best efforts of Cyclone Cook.

The Canterbury racer put in a blinder of a final run in the top-three elimination round with the fastest time of the day, blitzing 36 corners in just 51.11 seconds in front of the large crowd.

Caughey said, “It’s always nice to finish such an intense season’s racing with a really decent lap, our ENZED boat got a clean run and there was a lot to learn, given the length of the track, the idiosyncracies of the islands and some demanding wakes.”

Especially given that until late the day before, he didn’t have a navigator – a vital part of these events.

“This was very much a navigator’s course,” Caughey said. “We have run a similar rotation here before, and it was demanding. Since then they’ve put an extra island in and we have more power, and more speed – if anything it’s got harder as you approach some of those difficult junctions much faster than ever before.”

“To find our navigator, Wanganui’s Louise Blythe, couldn’t get here in time thanks to flight chaos caused by Cyclone Cook threw a bit of a curve ball…”

Caughey wasn’t kidding. Cancelled flights throughout the country meant that despite clear weather, there was no plane on the ground when and where Louise needed it, and though she tried as far afield as Auckland, and into almost any south-island airport, she wasn’t going to make the track before the SuperBoats hit the water.

“It was a busy time on the telephone, we put a call in to Shama,” Putaranui, Caughey’s navigator last season, “And she was able to arrive at the Altherm Jetsprint Championship venue in time for dinner Friday night, to learn the track and step straight into the boat on Saturday morning,” Caughey said.

“She really did an outstanding job all the way through, with precise navigating which is exactly what every SuperBoat driver needs, especially with a rotation like yesterday’s.”

Three of the first four SuperBoats in the top eight put in a wrong turn, which served notice to every navigator to up their game.

But as Caughey says, it’s not just the folk in the boat who win that trophy. “It was a great team effort, and a huge commitment by everyone in the ENZED team for the full championship season.”

“We took a risk to introduce a new motor part way through the championship season, but it’s put our goals for the next world championship well ahead of schedule as we build up a new Sprintec hull.”

Caughey says, “It helped that Phil, from TrackSport, flew down from Auckland to see what we were doing with the tune,” and not just because the engine was still fresh.

Again, Cyclone Cook played a part. “The air pressure was really bad for a naturally aspirated engine, we were racing at altitude and on the tail end of a cyclone, and I can’t ever remember such bad air pressure.”

That meant his engine didn’t have the oxygen it needed to develop peak power. “We were down about 100hp because of the altitude. Competitors with similar motors had the same issues, but the turbo boys like Glen Head and Graeme Hill aren’t affected by those fluctuations.”

The day wasn’t without incident. Blake Briant had been a strong podium contender, but had mechanical issues in the fourth qualifier that eliminated him, though a change in format on the day that dropped the top 12 elimination in favour of starting with a top eight helped his placing.

And of course there was Scott Donald’s spectacular off-course excursion into the safety fence. “The wires got into his hands, but our safety equipment is good enough that bar bruising, they were basically okay.”

Moreover, “When it comes to the southern jetsprint club, there are so many rural people they’re well capable of sorting some fencing, so there was only a short delay.”

Caughey left for the drive home with his champion ENZED boat tied safely onto its Trojan trailer and celebrating a win, his ninth SuperBoat title and 11th NZ Championship title overall – he has two Open Group B championships in his trophy cabinet too. On top of that, his own Sprintec boats took the top four SuperBoat places on the day, while another took the Group A title too, in the capable hands of Ollie Silverton in just his second season.

He says, “All in all it was a great end to the season, and to get such a good margin over the second-place getter at what is effectively our home track, and in front of family and friends, was just the icing on the Easter cake.”