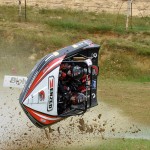 Caughey and Putaranui walked away from this spectacular crash

Canterbury SuperBoat racer Peter Caughey shook, rattled and rolled at the opening round of the Suzuki New Zealand SuperBoat series at Meremere on December 12.

The seven-time NZ SuperBoat champ was launching a much reworked monster motor and jet unit, and logged the fastest time of the day during the qualifying rounds, with a 44.284-second lap.

But it all turned pear-shaped at the first elimination sprint, when the boat was skimming the edge of the speedbowl at 120kph when it kissed the tyres, skipped the surface, reentered as the water changed depth – Caughey corrected, but not enough and the boat took off, flew two metres in the air, and rolled twice before landing – hard.

Fortunately both Caughey and his navigator, Shama Putaranui, were able to walk away from the crash, though she’s sporting a black eye, “she looks like she’s gone a couple of rounds with Mike Tyson,” and Caughey has collected some massive bruises.

“We got fantastic service from the crash rescue crew and St John,” Caughey says. “It’s the first time in 26 years that I’ve had a roll, and we did it in spectacular style but the safety gear held up, the seats are great, we walked away from it.”

The boat wasn’t so lucky, and Caughey has yet to confirm whether it’ll be back on the water in time for the second round, at Wanganui on December 27.

“It was a fast-flowing track and a good rotation, and we had truckloads of performance,” a bruised Caughey said after the event.

“Meremere had made some changes to the outside of the speed bowl to make it safer, and sediment was washing in, making it very shallow. It was a bit of a risky corner, but still raceable. Our Sprintec boats handle predictably and we expect it to slide around a little, I’ve been doing that for years.”

“I’d considered a change to tighten the handling, so wasn’t surprised when it slid a touch, but when it came back into the deeper section of the turn the boat gained more traction – that’s when the trim of any boat changes markedly when you’re driving at ten tenths.”

“I anticipated that, gave it a bit of oversteer, it kissed the tyres on the inside of the track and that’s all it took. It took off.”

“We left the water at 120kph, but the bottom line is we’re all heading home, intact, and ready to look at how to get the boat fettled for round two.”

Caughey acknowledges that the boat has gained more performance, “It’s new territory, and it has a different trim angle because of that – the result was a minor mistake, but one with major consequences.”

Caughey will have to work hard to get the boat back into racing fettle for round two. “We’ll know more next week. We’re not out of the game, there’s still a lot of racing to go from now to the final round.”

“With he caliber of equipment the top SuperBoat teams are racing, it’s a huge challenge for all the drivers, the boats, the jets, the unit and the teams and how they perform on the day – it’s part of the show.”

“There are many contenders with potential to win individual events and mix up the points tally. We’ll push on with the championship, get every point we can and see what happens at the end of it.”

Meanwhile two Caughey-built Sprintec boats were on the podium. Glen Head won the SuperBoats in his new Sprintec, with Leighton Minnell in second and Rob Coley third.

And Rick Burke finished second in Group A in a new Sprintec, “And that package is looking sharp.”

And the last word? “A hot shower, and a soak at Hanmer Springs on the way home. First thing Monday, we’ll start the rebuild process with help from our talented crew, and hopefully we’ll be back on the water for round two.”