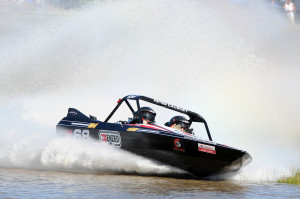 ENZED racer Peter Caughey’s holding first place in the NZ SuperBoat champs at the half way point, heading into round four at Hastings.

But the venue’s an unknown quantity for the four-time world champ, who’ll need all his experience to beat the demanding Crownthorpe track.

Caughey and his navigator, Karen Marshall, will walk the track on Saturday. “It’s had a number of rounds over the years but we haven’t raced there, so we need to get familiar with it, check out the shapes of the islands and channels and water depth, and work out how it’s likely to change over the day.”

Its six islands are “pretty nondescript” Caughey says, “so it’s a bit of a navigational mare by all accounts. But the islands are low, it’s well constructed and it doesn’t cause damage to boats though it’s hard on jet impellers as there’s a lot of gravel there.”

To add to the challenge on Sunday’s race day the area’s suffering a drought, so water will be lower than normal. “The first part of the rotation looks good but the middle’s pretty busy; still, this sort of track usually favours our boat but makes it harder for the supercharged and turbo craft to close the gap.”

Caughey’s team is calling in to TOTAL head office today then using the ENZED workshops at Suvic Hydraulics, in Napier, to change the oil and do some prep; “It’s nice to have those long associations and offers of support and the use of workshops and facilities, it makes racing a long way from home a bit easier, so it’s much appreciated.”

As for the opposition, “Local racer Graeme Hill is expected to rejoin the champs with his twin-turbo Nissan, and they’re boasting some pretty impressive performance figures from the dyno testing done with the new motor so it’ll be interesting to see how he goes.”

And defending champ Leighton Minnell will be back after mechanical problems dropped him down the order at last week’s Meremere round. “He’s sourced the parts and the team is working feverishly to get it together. There’s plenty on Leighton’s plate as he does a lot for the sport, he’s done a huge amount to improve it since he’s been NZ Jetsprint Association president and we really appreciate it,” Caughey says.

“But when the chequered flag drops at Hastings on Sunday, he’ll be just another threat.”