Peter Caughey put on a commanding performance at the penultimate round of the Suzuki SuperBoat champs at Wanganui last night, setting fastest time of the day at 46.44 seconds and leaping into the championship lead in what he described as action that was “hot, fast and at times wild.” 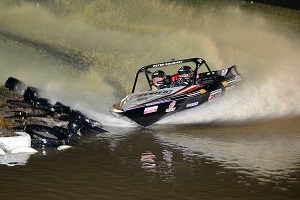 “Until now we’ve been pushing harder than we needed to test our package in the lead-up to the world championships in august,” Caughey said, acknowledging that had led to errors which lost the ENZED team some points.

“But going into this round our plan was to race for the championship – get consistent results and maximum points. We got a good sequence going, with no navigational issues and the boat trimmed to suit this track really quickly, and we achieved it. We set the fastest time of the day before the lights came on, and took the win in the final elimination round with the fastest time under lights, at 46.75 in front of Phonsy Mullan,” the Australian champ finishing the night second, on 47.54 seconds.

“I’d like to go faster in the final,” Caughey says, “but conditions were super-demanding. “A couple more lights would make that venue so much better.”

But it wasn’t lighting that caused the night’s first major drama at the Shelterview track. “There were some huge crashes, but two were really ugly,” Caughey says. “Group A racer Garry Stephen lost control at the end of the fast straight, shot off and smacked roll-cage first into the hay-bale wall. It was a huge impact and he and navigator George Meyer were both unconscious and taken to hospital for evaluation. The good news is they may be sore this morning, but we hear they’re expected to make a full recovery, though his six-week stand-down after concussion will keep him out of the final.”

As for the second serious crash, “Group A’s Duncan Wilson ripped up his boat on both sides when he flew from the water and took out a lighting pole. He’s okay, but there was a second delay to put up reserve lights.”

A driver meeting to discuss conditions saw the event continue as planned. “That’s where having a few kays on your clock as a racer help,s as you don’t get too emotionally involved in crashes. Duncan’s crash wasn’t a result of lighting but it put the willies up some of the competitors. You just have to race to the conditions, and there were no majors after that, just the usual offs that look spectacular but are more an issue of control.”

To cap off Caughey’s night, his Sprintec-built boats took all three SuperBoat podium spots, with four in the top five, “And we got a get-out-of-jail free card when Graeme Hill, the leader heading into the round, spat off the track after clipping an island and finished seventh.”

Caughey says Hill was gutted, “He’s a really good, intelligent racer but he’ll bounce back and this shake-up will generate an exciting final.”

Just five points separate the top three going into the last round at Wanaka on Good Friday.