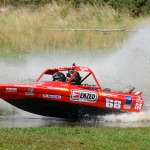 Defending SuperBoat champion Peter Caughey is gutted that a navigation error dropped him out of the final at the Suzuki Grand Vitara SuperBoat champs at Hastings on Sunday 8.

But he’s philosophical. “It’s a very difficult track to navigate around. We were making changes to our borrowed boat and felt we could get faster, and make it to the final. But as you get faster, shaving tenths and hundredths off your time, it’s easy to drop your vision to perfect the next corner, but that means you’re not looking at the whole track rotation, and it’s easy to miss a corner.”

And on the plus side, “the boat is nice and tidy and straight, when you’re racing a borrowed boat that’s well up the list. And we know it could go quicker.”

But better still, he says is that Rob Coley took his first-ever win in a new Sprintec boat – a craft Peter built – and Leighton Minnell is back in his favourite boat, a championship-winning Sprintec.

“Rob won with 45.96, Glen Head was second, Pat Dillon third and we cam fourth. We remain second in the championship, and we’re hoping to have our new engine up and running by Wanaka’s round on April 4.”

Hastings also put the Turbo Xtreme boat through its paces on a different track. The single seater is aimed at a new class with all boats equal, and results down to the drivers alone.

“Drivers are latching onto the concept, and we’re looking forward to debuting a boost button which will give the driver a 50hp burst for a given amount on a run.”

“People are getting quite excited by it all, so overall the idea is proving very appealing.”