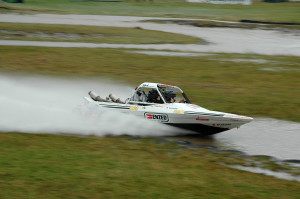 Defending world champion Peter Caughey is raring to go for the final round of the UIM World Superboat Championship at Wanganui this weekend, despite further delays to the new boat he’d hoped to debut there.

“We’ll continue with the ENZED boat we raced last weekend, the 600 cubic inch (9.9-litre) big block in the old Sprintec hull, and we’ll have spent a bit more time trying to improve that package a little – and to understand the beast,” he says philosophically.

“Wanganui is a more flowing track than Featherstone and it’s particularly fast, which should suit this boat, but it also suits Phonsy Mullan (Australia) and Dean Finch (Australia) with their twin-turbos,” Caughey says.

“Finchy’s had motor problems and rebuilt the top end, Phonsy has been out testing and trying to wear out that Australian V8 of his, and he’ll be competitive, so we’ll see some pretty impressive, if not spectacular action from Wanganui this weekend.”

The mighty methanol-breathing superboats specialise in the spectacular. Capable of accelerating from zero to 130 in 2.3 seconds, of racing three laps of the tightly twisting track in under 50 seconds and racing without brakes, they deliver spills and thrills aplenty as Caughey discovered last weekend, when the podium-regular crashed out of an elimination round after scoring second-fastest time of the day.

Undaunted, the Canterbury racer says, “We’ll have the opportunity to see superboats on the fast straightaways approaching speeds not achieved in the history if this sport before. I think they’ll head towards 140kph on the main straight, with a serious money corner at the hairpin that boasts a progressively tight apex.”

“It spits them out and gives them the washing machine agitator treatment – it can be pretty wild, and I wouldn’t want to approach it at 140 which Finch and Mullan will be able to do.”

But Caughey loves this track. “It does flow, it has some really fast areas where the high-power motors can strut their stuff but most of them lead on to the most serious corners, so technically those high-power boats can arrive at disaster a bit sooner than the rest of us – you need a lot of boat control to handle it.”

Caughey had hoped to have his newest craft ready for this round, the latest in cutting-edge superboat design from the man who sells his Sprintec boats to the world’s top jetsprint racers. “But it’s still not ready to go, which is so disappointing, but the guys at TrackSport are doing what they can with what they got.”

“What we received from the US is very disappointing and it’s been a huge challenge, not just the machining and the issues with the American block, but to marry all our beautiful equipment together.”

“The crankshaft alone took 14 weeks to make by Bryant Racing in California – we get the VIP treatment from those guys and the crank is one of those pieces of equipment we’re proud to own.”

“The cylinder heads gave us some grief but they’re a beautiful piece of engineering as well and they flow air figures we’ve not seen before.”

We’ve got some fantastic equipment, and we will get it all together happily and prepared to the highest standard – I know the guys at TrackSport can do that, they’ve done it before, but to get it right is time consuming process.”

“To build such a large small block Chev, everything wants to live in the same space and we have to have happy neighbours as there’s no room for discrepancy or there’ll be grief.”

Caughey says that though it won’t be ready for this weekend’s world championship final, he hopes to christen the new ENZED boat at a round of the New Zealand champs en route to having it in peak condition for next season.

But first, he and his team face a couple of long nights getting his leased boat ready to face the world’s best when the flag drops at Wanganui this weekend.