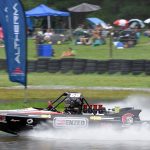 With rain steadying and defending SuperBoat champion Peter Caughey’s ENZED craft spitting oil from the breathers, it looked as if he’d be out for the count early in the elimination rounds at Hastings on Sunday.But the experienced battler and his equally experienced ENZED crew are used to challenges, and they kept the boat at the pointy end of the field when it mattered, coming away with second on the day, to extend his lead in the series.

Caughey says the weather again played a part, not so much in terms of rain, though there were showers; nor heat, though 27 degrees is never comfortable for racers dressed from head to foot in fire retardant gear and sitting almost on top of these might methanol-breathing motors.

“Air pressure was hideously low, less than 990 hectopascals, which spells trouble for an engine like ours. Turbo- and supercharged boats make their own air pressure and it doesn’t worry them, but we don’t, and we were down on power.”

Hence fettling the boat, but in trying to improve the breather assembly for better control, Caughey says the team took a step backward first.

“That meant we had more work to do, the crew had to clean it all up but they dug in and got the job done, the motor is still in good condition and I’m happy with the result.”

Especially since the track rotation had proved fast, partly because rain lifted water levels in the spring-fed track, and it became“A bit of a drag strip, albeit a busy one for sure, but needing lots of wide-open throttle, which suits some boats better than others.” Glen Head’s turbo was one, “His fastest time was impressive, but he peaked a bit soon and damaged his motor in the top five.”

The season dymanic changes in the second half, “Especially when you get guys like Blake Briant and I racing seriously for the overall championship result,” Caughey says.

“There’s a mental approach and discipline that goes with that, to get the job done, with only two or three weeks between events there’s not much opportunity to make repairs, so you have to look after your gear.”

Gary Stevens might wish he’d done the same. Repeated launching over islands and some open-throttle engine from his fabulous-sounding engine were certainly crowd pleasers, but he leaves this round with a boat which, “Needs some TLC, some hammers and a bit of bog before it will race again,” Caughey says, “But it will be good to see him back next round, as he’s been putting in some good times.”

Caughey says that though he’d rather have won, he was happy to extend his lead in a series with a high caliber of competition.

“With three weeks to round five in Wanganui, we’re taking home a healthy boat and motor, and we’ll be focusing on how to do better in the run up to the season’s final finish flag.”

Provisional Top 8 after three rounds of the Altherm Jetsprint champs