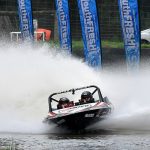 Peter Caughey and navigator Louise Blythe head into the final round with a six-point lead. Photo courtesy Ian Thornton

Defending SuperBoat champion Peter Caughey heads into the MouthFRESH SuperBoat class at the Altherm Jetsprints Championship final at Wanaka this weekend at the top of the points table.But he’ll have to get into the top five elimination round if he hopes to win, with a handful of talented racers still in with a chance of taking his crown.

All the racers are also facing the tail end of the severe weather hitting New Zealand, and an extended track with more islands to negotiate than ever – and that means more high-speed turns, in a sport where hundredths of a second count.

Caughey says “Wanaka’s Oxbow Aquatrack will win the contest for the hardest navigational challenge all season, with 36 direction points to remember – that’s almost a change of direction every second, at speeds of up to 130kph in a craft with no brakes…”

Better yet for spectators, it’s a technical track that’ll present a challenge to all the methanol-fuelled SuperBoats, “It’s probably well suited to a package with 1000hp, anything after that will require a driver to use discipline and self control on the throttle to get a good result.”

Caughey says the track has always produced exciting racing, and at Easter it pulls a big crowd.

They’ll be treated to the cream of New Zealand’s jetsprint racers – and that means some of the best in the world – battling out to see who takes this year’s crown. “We’ve got a six-point advantage, but we have to focus on racing for a win – the opposition will go there with the same intention, and a large number of them still have a chance to take the title outright.”

“Blake Briant, sitting in third on the points table, will want to address some unfinished business after his issues in the top 12 last round, but he’ll have had a long drive from Gisborne, similar to the distances we drive for most events.”

And Glen Head will be confident after his last-round win, “Though he’ll need a lot of focus to contain his boat’s power on this track: but he has a good-handling package and you can expect to see him in the top five, if not the final.”

Caughey says, “Rob Coley had a very good result here the last time he raced, so he’ll approach it feeling it’s a happy hunting ground, and Nick Berryman hasn’t entered yet, a surprise given his overall placing and given his strong position, he may enter late.”

Meantime the weather isn’t helping any of the teams test, or make the trip to Wanaka, but Caughey hopes to get out on the water, so he can make the most of his short drive to the only south-island round of the season, “The drive won’t test the Trojan trailer like the North Island rounds do.

Provisional Top 10 after five rounds of the Altherm Jetsprint champs