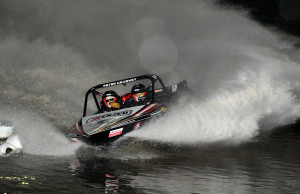 Peter Caughey was crowned New Zealand SuperBoat champion for the sixth time last night in an action-packed final round held at Wanganui under lights.

The late hour and intermittent rain didn’t deter the crowds, who turned up to see world-class racers put in some scorching rounds in risky conditions that saw some boats crash out of contention, and false starts due to debris in the water knocked loose by racers running half blind.

Caughey’s final run was a non-starter after a marker peg was spotted floating in the racing line, “It could have knocked our focus out but a piece of wood could get lodged in the jet, and we are thankful they decided to abort the run and clear it.”

And Caughey needed to focus, because with blindingly-quick local racer Pat Dillon out of the top three, Rob Coley and defending champion Leighton Minnell sharing another Sprintec boat were determined to take the top spot on the podium.

All three drivers needed lightning quick reaction times. These boats hit 120kph from rest in around two seconds and complete a complicated winding lap around those islands in well under a minute; as Caughey says, “you’re hurtling along a four-metre-wide channel with maybe three metres of navigable width at 120kph, and that moment you ID the corner and flick into the turn is 40 per cent shorter than in daylight hours. You have to process info really quickly, respond really quickly and not choke the boat.”

“It’s a whole new challenge racing under lights and in rain and heavy drizzle,” Caughey says, “but that wasn’t as bad as the steam coming off the track.” Caughey’s mighty 9.4-litre MegaMonster motor puts out 1100hp and it’s cooled by the water passing beneath it. “That makes the water on the shallow track warmer than the night-time air, and with steam, over 95 per cent humidity at water level, and the lights catching every droplet it was really noticeable. Add water on glasses and visor…”

Poor visibility knocked several competitors out of contention, and dropped Caughey a few places in the top 12 elimination round when he left his safety glasses in the pit, “We took a punt but when we got to the start the rain was heavy, and without the glasses my eyes took a fair hiding. We knew we could clear a time that’d get us through to the next round, but we’re thankful we learned that lesson early on,” he says.

Fortunately the rain then all but cleared, leaving only the steam and night conditions to contend with.

Caughey blitzed a 46.9-second final lap to win the round and the championship. “It hasn’t really sunk in that this is my eighth NZ championship win – and six in SuperBoats. When I started, even my wildest dreams couldn’t have predicted that.”

He’s quick to thank navigator Karen Marshall and his team, as well as his ENZED, Total and Trojan sponsors, the marshals and helpers that make racing possible. “You can’t race at the top level without a good team behind you, and sponsors as committed to that win as you are,” he says.

And the track is part of that equation, especially at that challenging last round.

Wanganui’s track controllers had painted edging tyres white and pounded white stakes into island shores, “they worked well but pegs got knocked out or washed away on some corners, with seven to four demanding for all of us; that 90-degree right hander meant Karen had to drop her navigating hand as I needed every bit of visibility. You’re in the corner before you realise where you are, but that Sprintec boat is so nimble, you just crank the steering and round you go and given we all had the same visibility issues, that advantage gave us the edge.”

Caughey says his ENZED team is very proud of its achievements this season, “And they’re all still hungry to race.”

With no world championship round this year he’ll be pushing his new boat harder and faster to keep ahead of the competition. “The calibre of New Zealand’s top racers means I can’t afford to take it easy, everyone’s already jostling to upgrade their boats for next season and we’ll have to stay ahead of that if we’re to springboard into the 2014 World Championship with a decent crack at it – we’ll be facing Australians, Canadians and Americans that are already showing pace.”

Meantime it’s back to Canterbury for the victorious team and a few days off before Caughey starts work on the next generation of boats to power the world’s fastest jetsprinters. 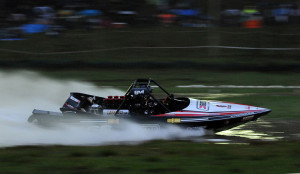