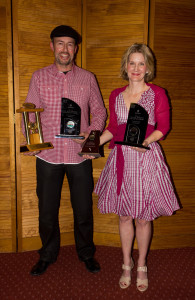 The six-time NZ and four-time world superboat champion designs, develops and builds boats for local competitors and for export, and to be recognised for it by his peers is fantastic, he says.

He and his ENZED senior engineer, Dave McCallum, “Put a lot of time, thought and planning into all our boats, but when we build one for ourselves we can push further and quicker and be more aggressive with our development.”

His 2013 championship-winning boat uses a Sprintec hull and a 9.4-litre small-block V8 Chev motor running on pure methanol. It’s capable of accelerating from zero to 120kph in 1.9 seconds – pulling 2G – and five to eight G of cornering force; performance akin to a Formula One car, deployed on shallow water in a boat with no brakes…

The award-winning ENZED racer launched for the first time at round one and was fine-tuned throughout the season, regularly posting fastest times and taking the team to first in the championship, another trophy for driver Peter Caughey and his navigator, Karen Marshall, and a feather in the cap of his ENZED, Total and Trojan sponsors.

It’s the first time Caughey’s team has campaigned a full NZ superboat season since 2007, as he’s concentrated on the world champs – with four superboat titles under his belt – and his customer boats.

Superboat racing has changed a lot in that time, “There are new tracks and venues, new races – it’s always a challenge to get back up to speed, to get the driver-navigator combo back in the groove, the team working together at events, and get the new boat working to its potential. All the top competitors are now racing at a speed few people have achieved, and this new boat is so fast – it’s certainly presented its challenges.”

That’s all in a day’s work for Caughey, who’s now developing a new boat for a Canadian client and a turbo lightweight craft “watch this space, if I told you more now I’d have to shoot you!” plus a new workshop to extend Sprintec’s range, and is further developing the Mega-motor and jet unit that snared him this year’s championship ready for the next season, which he hopes will springboard the team to the World Championship in the USA, in August 2014.

This is turning out to be a busy year, but the Engineering Excellence Award is a stand-out, Caughey says. “The Jetsprint Association Executive that decides the award is made up of current and past jetsprinters with over 50 years of experience. They’ve seen – and done – a lot of racing and to be recognised by this panel is quite something.”